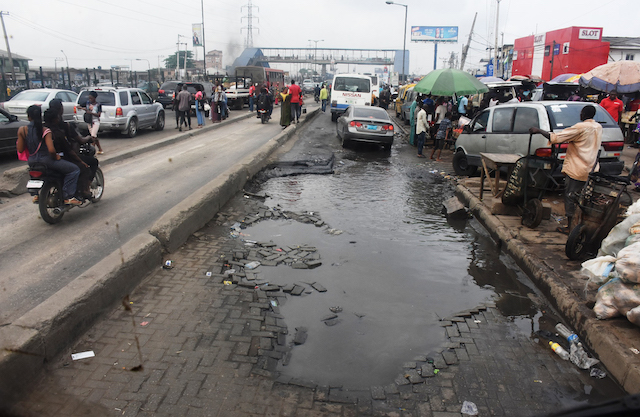 Some road users have decried the deplorable state of the Abaranje-Okerube Road located in the Igando-Ikotun Local Government Development Council (LCDA) of Lagos State.

They appealed to the government to urgently rehabilitate the road to alleviate the suffering of the residents of the area.

In separate interviews with the News Agency of Nigeria (NAN) on Sunday, they complained that the state of the road had become worrisome as the rainy season approaches.

Mr Samuel Ubong, a businessman, said that going to work had become a herculean task as a result of the several bad portions on the road.

“Oftentimes its difficult moving around, the road is in a terrible state; and as the rainy season approaches, it is going to get more difficult.

“As there is no proper drainage on the road, it will be in a sorry state this upcoming rainy season.

“Time, they say is money, it is going to take more time to keep an appointment when plying the road.

“I want to appeal to the government to help fix the road,’’ Ubong said.

Corroborating,  Mrs Evelyn Joseph, a seamstress, appealed to the state government to help fix the road as they did with the Ijegun-Ikotun Road.

“They just fixed Ijegun sometime last year, I strongly believe that they can help us fix this road.

“I just pray they come to our rescue before the rainy season,’’ she said.

Mr Sylvester Udofia, a commercial bus driver, said that the cost of fixing tyres and alignment weekly is financially exhausting.

“One week, one trouble, there is certainly one thing you will fix; while fixing tyres remained something we do virtually every day.

“The fare used to be N50 but even after increasing it to N100; it is still not helping us because we spend so much to keep our vehicles running,’’ Udofia said.

One would assume that mechanics would be making brisk business from the situation, but Mr Kazeem Eniola said that the reverse was the case.

Eniola revealed that incessant complaint from customers (vehicle owners) after duly repairing their vehicles had made them look incompetent due to the bad road.

“Imagine a customer complained about certain things, and you fix it and he is back complaining about the same thing again, it does not look good for you as a professional.

‘`One’s integrity is at stake when their customers keep complaining, so the best thing is for us to appeal to the government to help us address the bad road challenge,” he said.