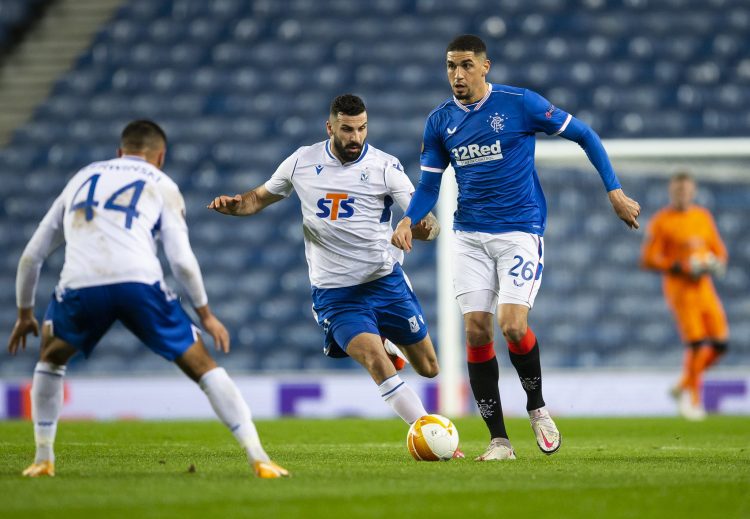 Leon Balogun has been a solid option at the Rangers defence this season.

Glasgow Rangers have been crowned Scottish Premiership champions for the first time since 2011 after Celtic were held to a goalless draw at Dundee United.

This success means manager Steven Gerrard has claimed the first major league title of his managerial career, with Rangers now holding an unassailable 20-point lead in the league table.

Rangers were consigned to Scotland’s fourth tier back in 2012 after the financial collapse, but have rebuilt steadily —- and have now denied Celtic a record-breaking 10th consecutive top-flight crown.

Rangers cruised past St Mirren 3-0 at Ibrox on Saturday, which brought the title in sight, and Celtic’s failure to find a winner at Tannadice gifted Rangers the silverware.

Former Liverpool and England midfielder Gerrard took the Rangers helm in 2018 and has now completed a remarkable end to Celtic’s prior dominance.

“After a superb campaign so far, Gers’ win over St Mirren put them on the verge of glory, with results elsewhere today meaning they can mathematically no longer be caught, with incredibly six matches still to play,” read a Rangers statement.

“It’s title number 55 for the club – the most of any football club in the world – and the first in 10 years following one of the most arduous decades in the club’s history.”

It is former Liverpool and England captain Gerrard’s first trophy as a manager in his third season at Ibrox and ends Celtic’s bid for an unprecedented 10th successive crown.

It is the earliest Scottish title win in chronological terms.

Rangers have dropped just eight points in an unbeaten Scottish Premiership campaign so far, with their victory on Saturday their 28th win in 32 matches.

They have scored 77 goals and conceded just nine —- only two of which have been at Ibrox.

The Glasgow club was in the bottom tier of Scottish football as recently as 2012 after their financial collapse and returned to the top flight five years ago.

Rangers’ first game as champions will be the third Old Firm game of the campaign at Celtic Park on March 21.