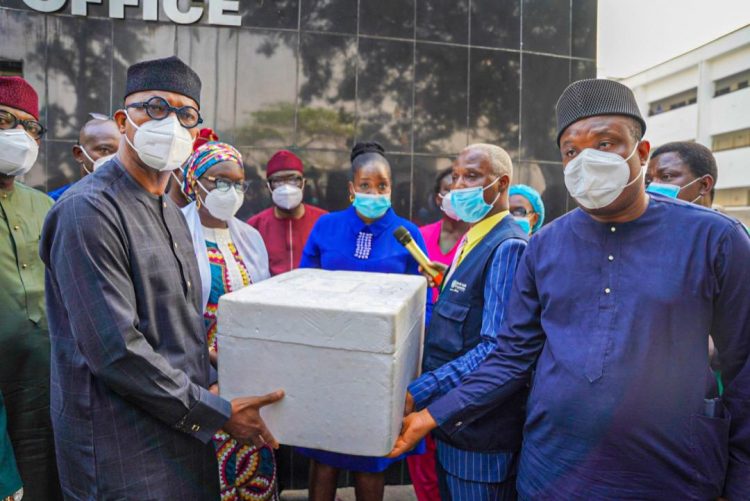 Ogun State Government on Monday received 50,000 AstraZeneca COVID-19 vaccines from the Federal Government in a bid to curb the virus.

The AstraZeneca vaccines which arrived the state governor’s office at about 6:00 pm were received by the State Governor, Prince Dapo Abiodun in his office at Okemosan, Abeokuta.

Abiodun noted that its was a great pleasure and delight to be the first state to receive the COVID-19 vaccines that was sent to Nigeria.

“We were suppose to receive 100,000 but only first 50,000 had been brought and hopefully the second batch (50,000) will arrive tonight or first tomorrow morning.

“The vaccines, once the ministry of health is ready, the vaccine will be available in both state and Federal hospital,” he added.

The governor also commended the presidential task force on Covid-19 for its efforts at reducing the spread of the dreaded virus.

On the safety of the vaccine, Abiodun reiterated that the state is relying on international certification of the vaccines, adding that the National Agency for Food and Drug Administration and Control, NAFDAC, had taken the samples and were subjected to test with its assurance that it is safe.

“NAFDAC took the samples, they subjected it to test and they assured us that is safe for our citizens.

“I want to say yes, the vaccines are here but what science tells us is that it is not the avenue to throw our mask away,” Abiodun said.

The governor, however, said he and his deputy, Engr Noimot Salako-Oyedele would be leading by example by making themselves available to take the vaccine as soon as the procedures are completed by the state ministry of health.