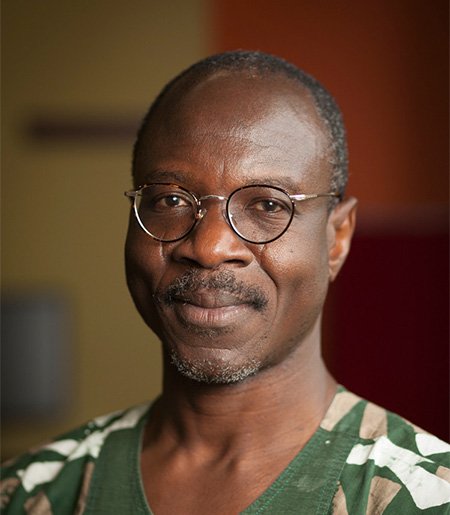 I want to tell you a story.This is the story of Professor Gbogboǹṣe, a.k.a. Awogbaàrùn.

Since I no longer live in Nigeria, I am no longer privy to what the situation is like now in our markets, our streets, or on our buses, municipal and interstate.  I recall when I was growing up the ubiquitous present of numerous ‘professors’ in those spaces peddling remedies by the bushel for whatever ailment they could pronounce and persuade their audience that they, the audience, that is, are victims of those ailments.  Of course the idea was that the cure being peddled was for the all ailments they could announce.  And, often enough, they had planted their pretend customers who would always be the first to order the cure and, by so doing, sell the rest of the unsuspecting audience on getting their own copies.  Those fellows—they were almost always men—were prolific and, as those who are familiar with or remember our dear departed comic genius, Gbénga Adébóyè, a.k.a. Fúnwọntán, and his memorable “Alhaji Oníkọ́” skit, there is not an honorific they met and did not fall in love with.  Above all, they were not beyond an egomania that made them appropriate to themselves every superlative they could think of.  No doubt, self-promotion comes quite easily to performers and bombast is often a prop for some terrific acts.

Unfortunately, we cannot say the same for the persona that is the star of our story: Professor Gbogboǹṣe, a.k.a. Awogbaàrùn.  Come with me, enjoy the story of our renowned professor.  The very definition of prolificity, just like our itinerant, bus-hopping, street-vending equivalent above, our professor and his minions—the equivalent of our pretend-customers—are always quick to repeat ad nauseam how he has published more books than Methuselah’s years on God’s earth!

Now, I would not like to be misunderstood.  As the saying goes, if you got it, flaunt it!  For a street performer, that is just par for the course.  To attract more purchasers for your pay-per-view gig, that is a requirement; shilly shallying for your audience is de rigueur.  But for an academic, especially when you expect the world of your peers to take you seriously, it requires a well-honed lack of awareness of the difference between people laughing at you and laughing with you to think that similar behaviour to that of street hucksters is the way to go.

From where I sit, serious academics anywhere in the world do not go around at their conferences saluting you for how many books you have put out.  Quite the contrary, some of the most storied intellectuals in our racket have the core of their reputations based on a book or, are you ready for this, an article, even when they have multiple publications to their credit.  Most of us are seeking to write “the book” or “the article” that would shake up the discipline or any neck of it and would bring instant recognition when your name is overheard at a gathering.  People approach you and, ever so respectfully, with awe on occasion: “you are the author of ….”  Such is the path of dignity in our common project in academia.

Not so for our much-vaunted professor!  There is an overlap between the respective consciousnesses of our bus-bound and our academia-based professors.  Prolificity has its pitfalls.Our beloved J.F. Ade Ajayi continues long after his passing to educate future generations with insights from Christian Missions in Nigeria 1841-1891: The Making of a New Elite (Ibadan: University of Ibadan Press, 1965).  I dare anyone to check the repertoire of Professor Gbogboǹṣe, a.k.a. Awogbaàrùn, our “most published scholar of eternity” for a similarly impactful work.  I hope his minions have the courage to correct me and call my lie for what it is.

Away from our shores, there was a fellow named John Rawls.  Enough said!  But there is a veritable global Rawls industry, and it is not driven by Rawls’s munificence and self-glorification.  I know for a fact that Rawls never curated a single conference in his name much less fund unseemly ego trips that lure unsuspecting contributors into thinking they are part of a serious intellectual enterprise.  There is a lesson here for those who wish to learn it.  More is not always merrier; as the Yorùbá tell us: Kìí dùn kó pọ̀, ṣókí lọbẹ̀ oge.  Certainly, Gbogboǹṣe cannot sit well with “oge”, any sense of beauty.  Enough said!

Unfortunately, certainly owing to our penchant for feferity and the younger generation’s amnesia respecting how the academy is supposed to run or meet its mission, the Gbogboǹṣe effect is manifest in institutions across the continent.  The continent is awash in praise-singers who mistake self-serving for generosity, whose brains are so addled that they are happy to disrobe not only for the Gbogboǹṣes of our world but also for anyone who is willing to drop a few dirhams into their begging bowls.  Even when they are in a different clime where you would expect that they would learn how the life of the mind is led and cultivated where they work, the Gbogboǹṣe effect subverts their good sense.  That is regrettable, to put it mildly.

I must not omit to celebrate our professor for his inimitable academic entrepreneurship.  No one can hold the lantern to him on that score.  But scholarship and entrepreneurship are not synonymous and that is a point that many in his amen corner either do not realize or fail to take seriously.

Gbogboǹṣe has probably outdueled the late M.K.O. Abiola in the number of honorifics garnered, from honorary doctorates to chieftaincies.  I am sure that Abiola never had two chieftaincies conferred on him on the same day by the same potentate in a single ceremony!  Prolific attracts prolific!  Not only is our professor the most published ever, but he also is singular in having had more Festschrifts dedicated to him than anyone else!  Where we copied the idea of the university from, Festschrifts do not proliferate.  Few and rare are those volumes because, where there are standards and excellence is what it really is—a rare commodity—not every ego is endowed with one and, among those very few, some of them even refuse to present themselves for such recognition.  Wole Soyinka announced a few years back that he would no longer accept honorary doctorates [https://thenationonlineng.net/done-honorary-awards-says-soyinka/].  Please check your records and see how many Festschrifts have been done for our genuine intellectual trailblazers. In the Gbogboǹṣe world, only numbers matter.

No doubt, if any evidence be needed that we have fully “decolonized”—to use a term that is the rallying cry of every unimaginative, fad-following, slight-chasingAfrican scholar these days—our professorships are now veritable chieftaincies.  They have become hollow honorifics or rewards for time serving, hardly any honour.  Public lectures are now icing on birthday cakes or adornments at our necrophilia-inflected obsequies.  Often, they are used routinely to celebrate meaningless birthdays for pretend achievers.  I digress.  Professor Gbogboǹṣe, a.k.a. Awogbaàrùn, has never met a praise-singer or panegyric he does not love.

And now, in the ultimate flattery, many of his disciples across the continent and in the larger world never fail to remind everyone how many publications they have inflicted on the world as a measure of their excellence in the academy.  Verbal and literate diarrhea!  Just put out the stuff, every sneeze is another book, and the like are the watchwords and organizing motto bequeathed to posterity by our much-decorated professor.  My sympathies to the trees that must pay for this profligate but spreading egomania.

This is not a new theme for me.  Here is what I said in 1990 concerning the publish-quick-and-often syndrome: “The second objection directs us to take seriously the gulf between the quantitative output of Nigerian academics and the paucity of quality, path-breaking research. In spite of what appears to be a rich harvest of publishing, the yield is in reality very poor. Very few Nigerian academics do multi-year, multi-volume research; the kind that is built up over several years reaching out in several directions, unfolding at different places, engaging the energies of numerous scholars from the middling senior undergraduate to the eager doctoral candidate, the post-doctoral fellow and mid-career researchers, under the able, even sage, direction of the experienced scholar. The proclivity for immediate gratification, the rush to fly through the ranks, the pressure to move on up to ameliorate an all-too-often desperate material situation, all combine to ensure that scholarship-for-promotion-or what an American might call ‘bottom-line’ scholarshipis the order of the day…. ‘Bottom line’ scholars move fastest up the academic totem pole. The power that comes with occupying positions at the apex of the pole combined with the ‘bottom line” scholars’ capacity for self-reproduction in their protégés have left us with universities top-heavy with mediocrities, pretenders in the corridors of the academy.”

Yet, I am sad to report that in a continent that can use some original thinking and pathbreaking ideas in the humanities and social sciences, beyond their contorted but often laughable, almost tragic, efforts to find some profundity in their principal’s writings, it is not clear to those of us who know and are in awe of the life of the mind well-lived, that the emperor has any covering on, much less a beautiful one.

Our species deserves better.  Don’t get me wrong.  I begrudge no one their good fortune and I desire no part of that emporium.  But I watch with a mixture of bemusement and sadness how otherwise smart, even gifted, young minds enlist in this hagiographic horde and willingly pervert their own scholarship to sing the praise of a scholar who, the records are there, started out well enough and then began to believe that if it is published, it must be good.  All the pity.

To end, we all must wish Professor Gbogboǹṣe, a.k.a. Awogbaàrùn well while we lament a future rendered bleak by the corrosive legacy he has procured.  This story is less about our professor-god.  It is more about reminding us what the life of the mind and the domain that is solely dedicated to it—academia—are supposed to be.

Things can always be other than they are.  We need be reminded that there are more models of academics and intellectuals.  The rest of us who treasure those other models owe a duty to speak out against this stench enveloping our practice.  Always remember, as we say in Yorùbá, gbogbo ohun tó ń dán kọ́ ni wúrà.It is past time for a good old academic debate about excellence and how it is identified and celebrated.  Any takers?