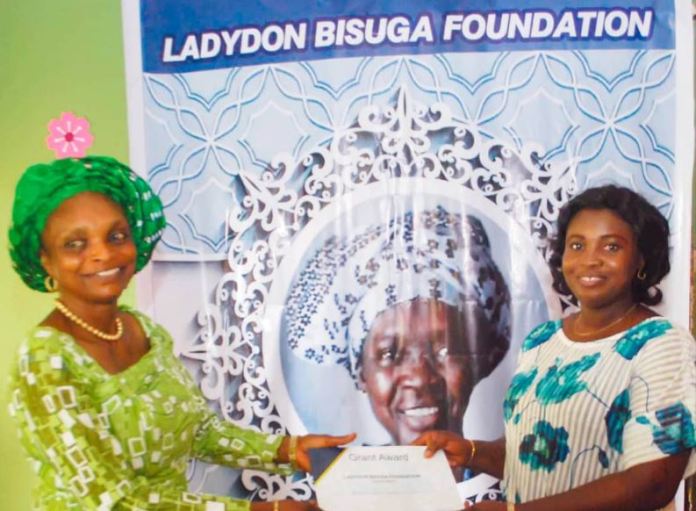 Mrs Omotayo Adesanya presenting a grant to a beneficiary

A foundation set up in the name of Mrs Olaide Morenike Bisuga has given grants to women as it seeks to promote mental, emotional and physical wellness.

The Foundation which was launched on the 80th posthumous birthday of Mrs Olaide Bisuga popularly known as Ladydon will help struggling women find their footing by giving grants especially in the area of education and business.
The Foundation also donated musical instruments to a church because Ladydon was not only a Women’s group leader when she was alive, she was a devout Christian.
At the private launch in Lagos, the Foundation gave grants to six beneficiaries; two education grants, two single mother grants, one orphan grant and one to the young man who helped care for Ladydon until her passing on 30 December 2019.
On the vision and mission of the Foundation, her children said it was set up to promote the girl child and help her actualize her potentials; promote mental, emotional and physical wellness in women and to promote economic independence and empowerment of women.
The Foundation is also expected to promote the power of forgiveness and to promote the power of optimism and positivity even in the face of adversity.
Speaking at the launch of the Foundation, Mrs Omotayo Adesanya, Ladydon’s first child said, “Ladydon was a woman of good virtue and a disciplinarian. She loved her family, and mostly her children.  With God by her side, she was able to succeed in training her own children and others too. She will always be in our hearts.”
“One of my mother’s favourable quote is  “there is no food for the lazy man” She had a never-say-die spirit and she always believed in people. If she heard or saw a child without parents, she will immediately ask that child to start living with her family.”
“She believed in education and she pushed all her children and many others to go to school. She fought for those who could not fight for themselves and spoke for those who couldn’t speak for themselves.”
“She impacted a lot of lives when she was alive and she is doing that now that she is resting with God in Heaven,” Mrs Adesanya said.
Also speaking at the launch, her son Babatunde Bisuga said the Foundation represents everything his mother stood for when she was alive. “This Foundation is a mirror of my mother, she was all about equality, and she wanted people to freely exercise their rights. She also believed that people should practice their religion without fear.
He noted that Ladydon promoted ethnic equality as well. “We live in times where ethnic and religious tension is high and these are two things she always spoke up about. She embraced all tribes and all religions and she never spoke ill of anyone. It was always loving over hate for her”
The Foundation will continue to touch the lives of Nigerians especially women all year long as it demonstrates what Ladydon stood for.
Tags: