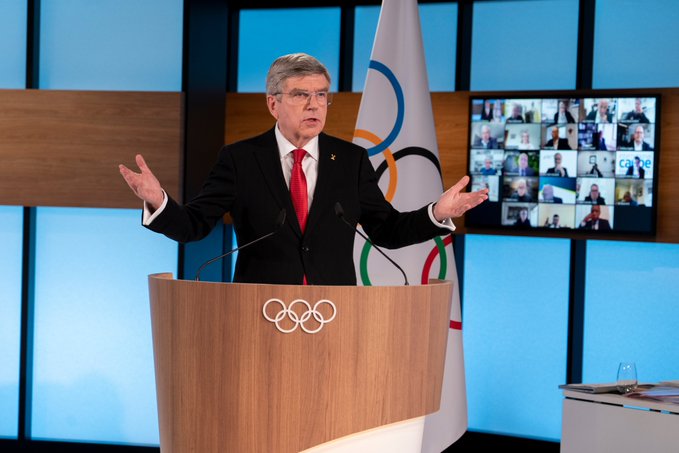 The re-election, on the first day of a virtual IOC session, will keep him in the post until 2025.

“Thank you very much from the bottom of my heart for this overwhelming vote of confidence and trust,” he told members.

“I want to continue to achieve ambitious goals with you in the post-coronavirus world.”

Bach took over in 2013 as the organisation’s ninth president since the body’s founding in 1894, succeeding outgoing president Jacques Rogge and beating five other candidates.

Presidents can serve two terms – a first term of eight years and a second of four if re-elected.

A German lawyer who won a gold medal in fencing at the 1976 Montreal Olympics, Bach has been an IOC member since 1991.

After becoming IOC President in 2013 he introduced a string of reforms a year later designed to reduce the cost and size of the Olympics, as potential host cities were scared away by the financial implications linked to the Games.

“In my second term I will follow the same style of consultation,” Bach told a news conference.

“I want to be a president for all the IOC members and all the stakeholders. Listening, consulting, taking into consideration and then coming to decisions that we think are the best for the future of the Olympic movement.”

“The overall challenge will be to make the Olympic movement fit for the post-coronavirus world,” he said.

Bach also had to navigate through the fallout of the 2014 Sochi Olympics doping scandal that led to consecutive Olympic bans on Russia, and a troubled 2016 Rio de Janeiro Games marred by financial and political problems – and several corruption investigations.

The 67-year-old has also faced the postponement of the 2020 Tokyo Olympics for a year due to the COVID-19 pandemic – the first Games to be delayed in peacetime.

Bach has ruled the IOC virtually unopposed, with the vast majority of decisions in his eight years receiving unanimous support from its members, who currently number just over 100.

More than half of them were appointed during Bach’s first term.