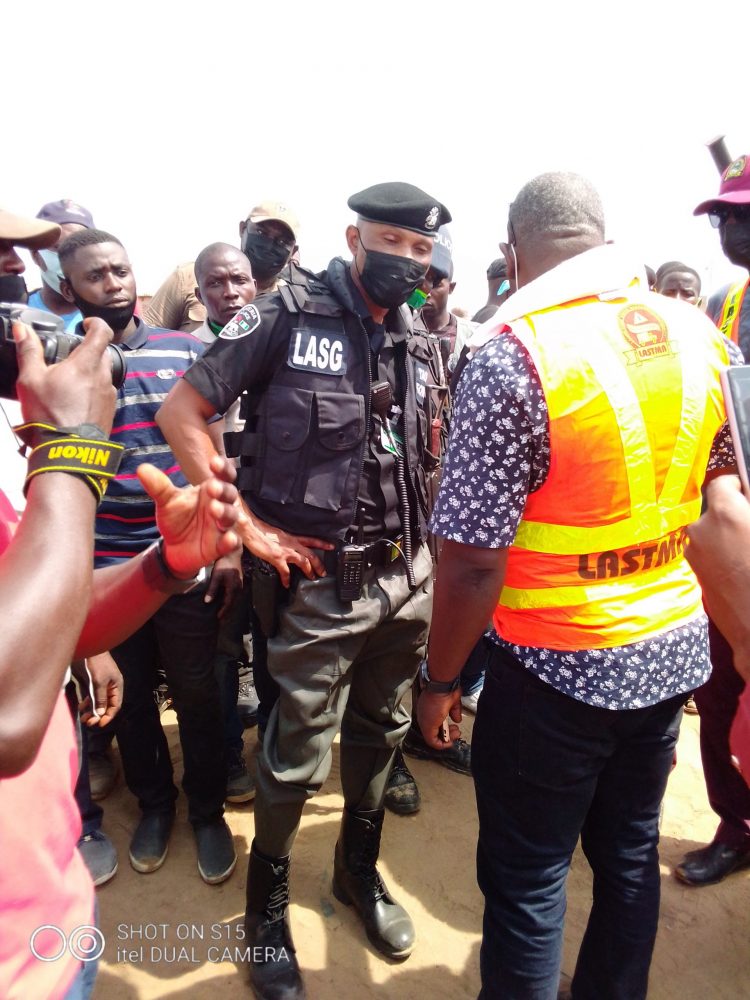 The Lagos State Task Force has labeled the dredging site at Addo Badore, Ajah, criminals hideout and a place where dangerous weapons are concealed.

The Chairman of the task force, Shola Jejeloye, stated this today during an unannounced inspection of the site, alongside officials of the Ministry of Transportation (MOT).

Jejeloye vowed that the dredging site will be sealed until a final solution is reached between the operators of the site and the government.

He added that the inspection of the site also became necessary in order to ensure sanity on the Addo Badore road.

He said Addo Badore road has been experiencing massive gridlock because of the illegal parking of the trucks owned by the operators of the dredging site.

“We have to come to a round table to determine how many trucks will be allowed here in a day or even if 1000 trucks come here in a day, it must be done in a way that must not obstruct the movement of other road users,” Jejeloye stated while speaking with newsmen at the site.

“There must be sanity in this area. We don’t want to see trucks by the roadside anymore. So we are coming here to seal this place and pronounce it, anyone that operates here until the matter is being resolved will be arrested. Badore is no longer a village where anyone can come and block the road. The act is barbaric. If the operators of this site fail to comply with the rules of the Lagos state government their license will be withdrawn.”

The task force chairman also noted that most of the dredgers are working illegally and have taken over the lagoon.

He said: “A lot of atrocities are going on here, you can see a lot of dredgers on the water operating indiscriminately. And they want to sell all the sand in a day, so it is not possible for them not to block the road. So we won’t allow them to have their way in Badore.

“This operation is for the people of Badore. People living here find it very difficult to get to work because of this illegal packing on the road. This is now a criminal hideout and because of that, we would write a report to the Commissioner of Police.”

On why the arrest was not made on the site, Jejeloye said: “This terrain is very difficult and our major aim today is not to arrest but to make our intention known that this place is no longer a place where everything goes. The site is close to the road, how can they be operating in a kilometer to the road and you have over 100 trucks coming here within 30 minutes. It’s not done. So, we want the Commissioner For Mineral Resources to come and address this issue, maybe they relocate them because the major concern now is that it is a criminal hideout.”

He added that the dredging activities have done a lot of damages to the government facilities.

“Do you know how much the Lagos government spends on the repair of roads on monthly basis? and the revenue they generate is minimal when compared to the damages. This is part of the things we will put in our report,” Jejeloye added.

On the activities of the dredgers, he said: “I cannot conclude if their activities are legal or illegal until the Commissioner For Mineral Resources says so. But as we can see here, the dredgers have overtaken the lagoon. If we make any serious move here you will see those guys jumping into the water and we don’t know what might happen to them.

“Our major reason for coming here is to ensure that they stop operating with impunity.  Truck drivers will occupy one lane and enforce other users to make use of the other lane, this must stop.”

Commenting on the development, the Special Adviser to the Governor on Transportation, Hon Oluwatoyin Fayinka who is also the Chairman, Traffic Management Enforcement Team noted that the Ministry of Transportation had invited the dredgers and truck drivers to a Stakeholders meeting severally where guidelines for their operations were also signed.

He stated that the recalcitrant attitude of the dredgers and their ‘truck drivers’ customers has led to the State Government decision to wield the big stick of enforcement today, ” this operation has become expedient because of the impunity of truck drivers who at times block one lane permanently out of the two available leaving only one for other road users to struggle with, we are not going to allow this to continue, it is absurd.”

The Special Adviser assured that the reports of the Enforcement tour of the axis today will be further evaluated for a better reappraisal for the next line of action which may include sealing off the dredging activities in the axis.