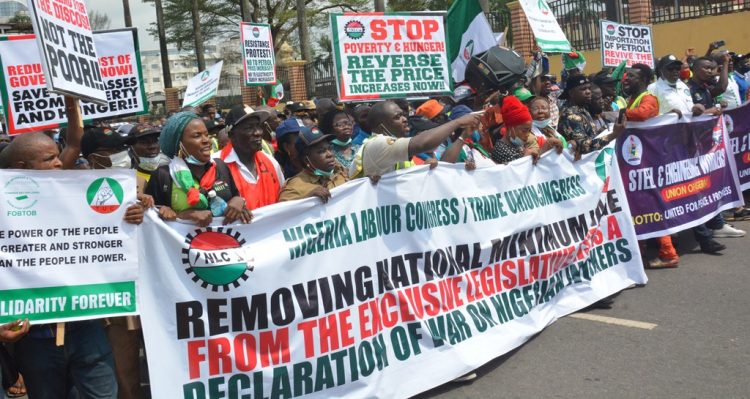 Thousands of Organised Labour on Wednesday stormed the Lagos State House of Assembly to protest  plans by the House of Representatives to move the minimum wage from the exclusive list to the concurrent list.

They described the bill as obnoxious. The bill was sponsored by Garba Datti, who represents a constituency in Kaduna State.

The placards read: “Stop poverty and hunger! Reverse the price increase now,” “Removing National Minimum wage from exclusive legislative list a declaration of war on Nigerian workers,” among others.

Speaking at the protest, Lagos State Chairman, TUC, Gbenga Ekundayo attacked Datti for being shallow minded and lacking the foresight to think and see ahead, saying that assenting to the bill would throw Nigerians into further misery because it would allow private employers to treat their workers as slaves.

“We know the situation is a matter of the voice of Jacob and hand of Esau. We know the governors are beating the drum, and if we dance to it, none of us will like it. We have come to express our displeasure and ask that the bill be stopped immediately.

“It only shows the shortsightedness of Datti because minimum wage is not only about the government; it covers every Nigerian, even those who work in factories. When the minimum wage is sent to the concurrent list, the factory workers will be at the liberty of their employers who would continue to use them as slaves, even in their own home. We have enough challenges already, we don’t want them to increase,” he stated.

According to Ekundayo, people should look ahead and not just think of today, saying that if the National Assembly felt compelled to remove the minimum wage from the exclusive list, then members should also return to their states and demand that federal allocation be stopped, and that each state should then manage its resources.

He said the lawmakers should also return to their constituencies and live according to what their states could afford, adding that as long as the nation operated a federal allocation regime, the minimum wage would remain a national law.

Ekundayo warned that any attempt to do otherwise would be resisted with the last drop of blood, saying that labour would not allow the lawmakers to pauperise them further.

“We expect our leaders and representatives to have some foresight, be creative, think and see ahead and not come with tools to kill and pauperise Nigerians. A time will come that we will organise to recall representatives who do not stand to protect workers and the common man.

“We will shut the National Assembly, and if need be shut down the country is this bill is not stopped. They should prepare for a mega strike if they don’t stop this bill. As a responsible government, if u sign on to the International Labour Organisation (ILO) convention of 1928, which stipulates the minimum wage, and you have signed it as a national law, nobody should try to take it from us through the back door,” he said.

Also, Chairman of NLC, Funmi Sessi described Datti as dishnonourable. She also accused the leaders of working to kill the common man by paying workers starvation wage instead of a living wage.

She said labour had come to the Assembly in peace to register their displeasure against that unpopular bill sponsored against workers.

Sessi said “if you want to sponsor a bill, it is good to call us together because we are all stakeholders. While other countries are looking for ways to give palliative to their people, especially during this Coronavirus pandemic, our own leaders are looking to kill us and take away our livelihood; but we will not allow that.

“The policies of our government are always wicked and against the people. We are fed up. All we saw during the endsars protest will be a child’s play if this bill sees the light of day.

“We don’t mind taking over the National Assembly until the decision is changed. Workers have the right to a living wage but what we get in Nigeria is starvation wage. That wicked dishonorable member that sponsored the bill feeds his dogs with food worth more than 30,000, monthly but workers should get 30,000 monthly. How much is that for a family of six?”

Addressing the protesters, Nurudeen Solaja-Saka (Ikorodu II), assured that their requests would be delivered to the Speaker of the House of Assembly, Mudasiru Obama, whom he said was on a state assignment.