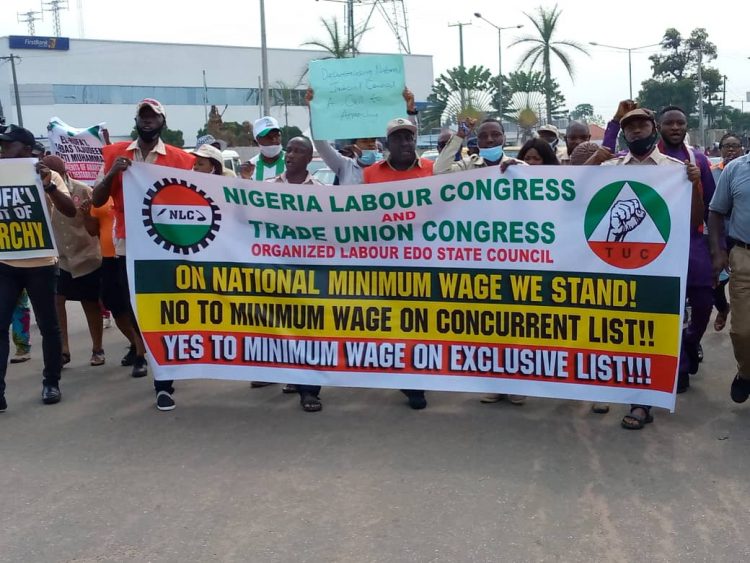 Members of the organised labour in Edo state on Wednesday joined their counterparts across the country to protest against a bill seeking to remove the national Minimum Wage from the exclusive legislative list to the concurrent legislative list.

The organised labour under the auspices of the Nigeria Labour Congress (NLC), matched around the popular King’s Square to the State House of Assembly, where they submitted a letter of their grievances to the Speaker, Marcus Onobun.

Clark of the House, Mr Omogbai Audu, received the protesters on behalf of the Speaker.

Presenting the union’s demands to the Speaker, Comrade Sunny Osayande, State Council Chairman of the NLC, said moving the minimum wage from its current list to the proposed concurrent legislative list will be tantamount to negation of the efforts of the “Nigerian working class in the past 40 years to free itself from the cruel manacles of slave wages, savagery working conditions and the slave drivers.”

He noted that the national minimum wage is the global standard adopted by the International Labour Organizations (ILO) and that Nigeria being a member of the ILO, will be wrong to implement such a law.

“The national minimum wage is the benchmark minimum below which no employer of labour can pay an employee in any given national jurisdiction. It is a global standard. It was adopted as an International Labour Standard by the International Labour Organization (ILO) as Minimum Wage Fixing Machinery Convention 026 of 1928.

“Each member state of the ILO that adopts this convention undertake to establish a system of the minimum wage which covers all the sectors of the economy including the organized private sector which wages are to be paid hourly, daily or monthly as the case may be,” he said.

Sunny argued that if such law is implemented, it could lead to the exclusion of the private sector (both organised and unorganised) from the concept, rationale and logic of national minimum wage, saying, it is in the informal sector that “horrendously unfair labour practice takes place.”

He continues, “A license for state governors to drag the country back to the era of ridiculous slave wages which in the past had participated multifarious industrial crisis in different parts of the country.

“The exponential creation and expansion of a community of the working poor with all the attendant consequences for socio-economic cohesion, stability and progress,” he said.

Responding, the Clark of the House thanked the protesting workers for their peaceful conduct, promising that he would deliver their message for the needed consideration.

Recall that Hon. Garba Mohammed representing Sabon Gari Federal Constituency of Kaduna State at the National Assembly sponsored a bill that sought to move the national minimum wage from an exclusive legislative list to the concurrent legislative list, which has passed through the first and second reading.