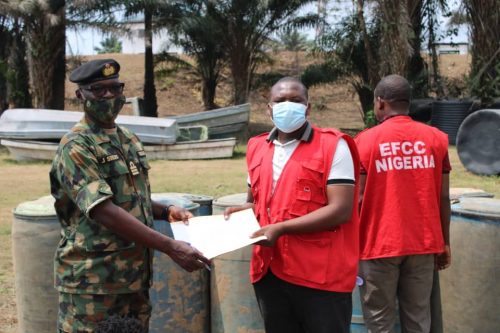 The Uyo Zonal Office of the Economic and Financial Crimes Commission, EFCC, has taken over the investigation of four suspected illegal dealers in petroleum products.

The suspect and the 35 (300-litre capacity) drums of suspected premium motor spirit, PMS; two wooden boats and one fibre boat recovered from them were handed over to the Commission by J. Shenu, the Commander of the Nigerian Navy Base.

DDS Abubakar Musa received the suspects along with the boats and the products on behalf of the Commission.