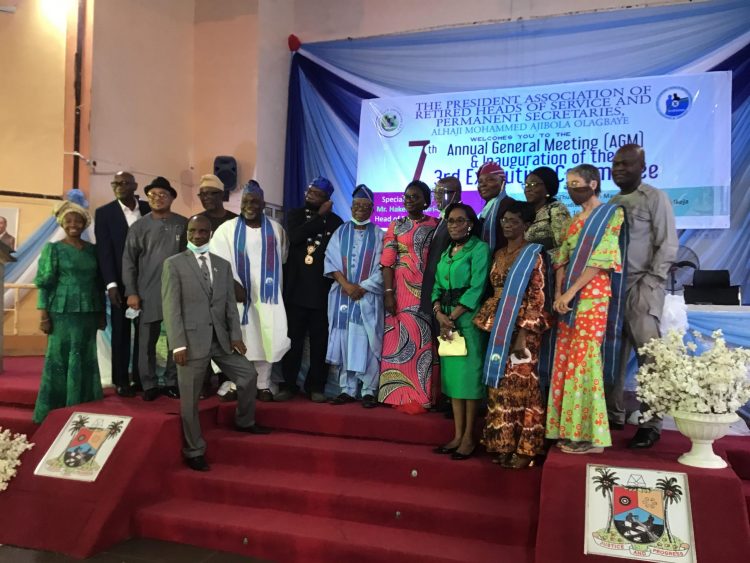 Lagos State Head of Service, Hakeem Muri-Okunola on Thursday solicited for more support from the Association of Lagos State Retired Heads of Service and Permanent Secretaries (ALARHOSPS) for good governance.

Muri-Okunola spoke at the 7th Annual General Meeting and inauguration of the 3rd Executive Committee of the Association held at the Adeyemi Bero Auditorium, Alausa, Ikeja.

At the event, the new President of the Association, Dr. Olufemi Olugbile and other executive members were sworn-in.

Charging the new executives to continue from where their predecessor stopped, the HOS, said the challenges today might be different, but that the goals of good governance and quality service delivery remained the same.

“However, in rendering your service of love and sacrifice, it is important to recognize that the new normal would necessitate that things must be done differently, henceforth. As senior citizens, always ensure that all COVID 19 safety protocols are strictly adhered to where the Association’s programmes and activities require physical attendance,” he said.

Muri-Okunola said there is no gain saying that the world is fast changing and that these changes could be attributed to a lot of factors, some of which were the COVID-19 pandemic, increasing insecurity of lives and properties, new dimension of youth restiveness and the expanding role of technology in daily lives.

“is in view of these developments and other emerging realities in governance and public administration that the Lagos State Government established Offices such as the Office of Transformation, Creativity & Innovation (OTCI) and the Lagos State Resilience Office (LASRO), including the resuscitation of the Lagos Economic Summit (Ehingbeti), which was held only a few weeks back.

“The common thread in this three entities is fostering and facilitation of synergy and consultation with a diversity of stakeholders across sectors towards enriching policy formulation and implementation within respective theaters of interests, mandate and operations.

“In the same vein, the initiative of the establishment of the Association of Lagos State Retired Heads of Service & Permanent Secretaries was predicated on the same recognition that Government cannot do it alone and that all hands needs to be on deck.

“And in this regard, the positive impact of ALARHOSPS in its policy recommendations over the years cannot but be appreciated and commended. Indeed our expectations should be no less; given the calibre of ALARHOSPS’s membership and leadership. No wonder other States of the Federation have adopted and actualized the same concept in deepening policy initiatives and governance quality,” he stated.

The new ALARHOSPS’ President, Olugbile said the the association would mobilise and leverage the rich public service experience of retired Lagos State Heads of Service and Permanent Secretaries and continuously assist the state government for sustained prosperity of Lagos State and Nigeria.

“The reward for good work, as the saying goes, is more work. In reality, this means we expect ourselves to have our hands full, as a direct ‘consequence’ of the good work that has been done already.

“Beyond all that, we will, of course, be taking a fresh look at the broad agenda of the Association as set out in its Constitution, with a view to exploring the use of new thinking and technology to further achieve the stated aims and objectives,” he said.

Olugbile added that his new team would prioritise on members’ welfare, health and wellness, saying that the dichotomy between the pensions of the members on Pay-As-You-Go scheme and those in the Contributory Pension group would be vigorously addressed with a view to further reducing, and if possible, eliminating the difference.

“Regarding health, we intend to sign on, all ALARHOSPS members immediately onto the State’s Basic Health Insurance Scheme. We are gratified that the outgoing executive committee has already made a commitment in this direction.

“We shall, with the approval of the house, proceed speedily to implementation. To kick-start the process, the Association will be responsible for paying one year’s individual premiums on behalf of all its members. Those members who wish to sign on their spouses and other dependents will have to make additional payments to cover these,” he said.

He added that wellness of members would be addressed in a deliberate and continuous way through regular health education talks and issuance of informative literature such as flyers on different topics related to prevention of illness.

Olugbile stated that the new executives shall seek to deepen the impact of the ALARHOSPS Summit by pushing for a stronger interactive engagement with serving Permanent Secretaries and senior civil servants, especially those of the Director grade.

“This, we believe, will increase the chances of the results of the deliberations being translated into policy that will ultimately benefit the government and people of our State, and remove any ‘us-and-them’ barrier to execution.

“We hope to continue the visibility and participation of ALARHOSPS in regional and national associations for Heads of Service and Permanent Secretaries, in order to maintain the primacy of place and recognition enjoyed by Lagos State,” he added.

In tandem with the times, Olugbile said there would be an increased use of Information Communication Technology (ICT) in the running of the affairs of ALARHOSPS.

“This will include virtual interactions, creating a virtual database in an appropriate cloud repository to supplement hardcopy records, and upgrading the general standard of the use of ICT in the secretariat. In the course of time, ALARHOSPS will have an interactive website that its members may relate with or tap into from any part of the world for information.

“The skills of existing Secretariat staff to facilitate this level of operations will be upgraded through training, if possible. If this proves impracticable, staff with appropriate levels of IT-enabled skills will be procured to assist the Secretary in manning the secretariat,” he stated.

“We promise to strive with every sinew to meet these performance targets that we have set for ourselves. It is our fond hope that, at the end of our tenure, we shall be handing over to the fourth Executive Committee a strong and viable ALARHOSPS, in the same manner in which it is being handed to us now,” he added.