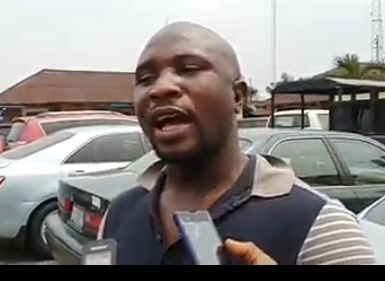 The Rivers State Police Command has paraded one Mr Favour Ibama, for allegedly drugging, raping, and robbing over 20 young ladies after luring them on social media with enticing promises.

It was gathered that Ibama is a married man and father of four children.

During the parade five of his alleged female Victims were present, but three agreed snapshot, backing the cameras.

The ladies claimed that the actual number of victims were about 20 who may not want to show up immediately for obvious stigmatization but would testify as the investigation continue.

The Spokesperson of Rivers State Police Command, SP Nnamdi Omoni, on while parading the suspect on Thursday, disclosed that he lures his female victims on social media dating site called “Tinder” and other sites with mouth -watery promises and allegedly drug them after which he will rape and cart away all their belongings.

SP Omoni stated that the suspect was arrested when he was spotted at a popular supermarket at Ada George, Port Harcourt, by one of his recent victims who raised an alarm that attracted passers by who apprehended him and handed him over to the Police.

SP Omoni revealed that his modus of Operandi is the same as the serial killer but only that he does not kill his victims.

Omoni disclosed that the command has deployed technical intelligence to recover the items he carted from the ladies, while the investigation is ongoing.

Some of the victims that spoke to our correspondent explained that after days of chatting with him on social media, he books a date with them in a hotel where he drugs their food, and after they consume the food they will fall asleep only to wake up to discover that he slept with them and made away with all their belongings.

Two of the victims revealed that he transferred N135,000 and 185,000 naira respectively from their phones while they were fast asleep.

Meanwhile, the suspect Mr Ibama denied the allegation in an interview with journalists.

He, however, admitted making love to his victims after enticing them with enticing amounts of money but never fulfilled his promises, blaming his action on the “devil, idleness and cashes on the greed of his victims”.

Mr Ibama admitted chatting one Blessing up on social media and the lady agreed to have sex with him if he pays 20,000 naira.

He disclosed that after they ate and had sex the lady who had allegedly smoked ‘weed’ suspected to be Cannabis Sativa slept off, and he left her without paying her the agreed money.

He denied stealing any of their properties or withdrawing money from their accounts.

The victims claimed that he drugs their drinks and food only to wake up and discover that he had sex with them and abandoned them in the hotel rooms.

He confessed in an interview that his wife just gave birth to in January is already threatening to divorce him because of his randy lifestyle and alleged criminal tendencies.

On why he doesn’t pay his victims as agreed, he said:” You know after sex there’s the tendency to get tired. Like the last girl, I left her in the hotel bed and bolted away while she was fast asleep.”

In the meantime, the Chairperson of Nigeria Association of Women Journalists (NAWOJ), Rivers chapter, Susan Serekara -Nwikhana, has condemned the incident and called for justice on the matter.

The NAWOJ Chairperson, Susan Serekara -Nwikhana advised ladies to scrutinize people they meet on social media before mingling with the person.

Also, a female legal practitioner, Yvonne Aimiegheme, and a representative of the International Federation of Women Lawyers(FIDA) tasked the Police to ensure a thorough investigation and justice on the matter.