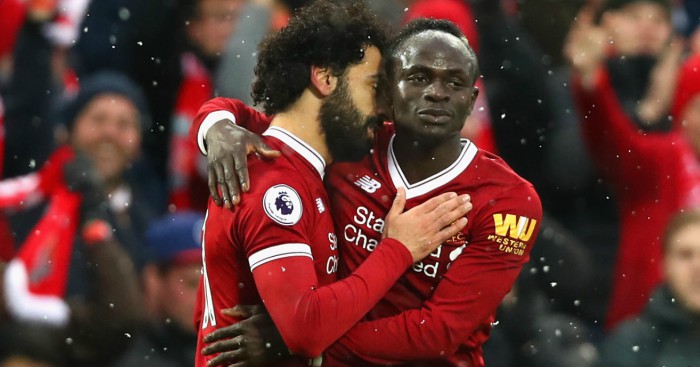 Second-half goals from Mohamed Salah and Sadio Mane eased Liverpool into the quarter-finals of the Champions League with a 2-0 win over RB Leipzig at the Puskas Arena on Wednesday.

The win saw the Reds completed a 4-0 aggregate victory over their German opponents.

Liverpool, leading 2-0 from the first-leg yet struggling in the Premier League after six straight home defeats, had several chances to extend their advantage in the first half but lacked sharpness in front of the goal.

Both legs of the last-16 tie were played in the Hungarian capital due to Germany’s COVID-19 related travel restrictions.

While it was an unusual home game for Liverpool, there was a more familiar look to the 2019 Champions League winners’ lineup with Brazilian Fabinho back in a midfield role.

Mane had an early chance but blasted over from a promising position but Leipzig knew one goal for them could set the nerves jangling for Juergen Klopp’s side.

Liverpool keeper Alisson Becker did well to smother a shot from Dani Olmo in the 11th minute while at the other end Diogo Jota saw a header tipped over the bar by Leipzig keeper Peter Gulacsi.

Gulacsi then did well again to keep out a Salah shot after the Egyptian had been set free by a long ball forward from Thiago Alcantara.

The Germans continued to ask questions though with Emil Forsberg shooting wide from inside the box in the 33rd minute but Liverpool should have had the lead before the break.

Gulacsi parried another Jota effort and then on the stroke of halftime the Portuguese forward wasted a great chance when the ball fell to him at the back post, after poor defending from Dayot Upamecano, but he fired into the side netting.

Liverpool finally broke through in the 70th minute when Jota fed Salah, who cut across the top of the penalty area before drilling into the bottom corner.

Four minutes later, Mane made it 2-0 on the night when he met a Divock Origi cross from the right with a first-time finish, steering the ball home with the outside of his foot.

“It is a big result for us,” said Salah.

“We came here after losing a few games in the Premier League.