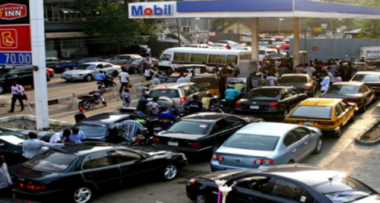 Frustration is growing in Nigeria as fuel scarcity hit Lagos, Abuja, and several other cities across the country.

Residents besieged fuel stations in major cities across the country, in anticipation of yet another season of the fuel crisis following the petrol pricing template published by the Petroleum Products Pricing Regulatory Agency (PPPRA) which explained that petrol is expected to sell at a lower retail price of N209.61 and at an upper retail price of N212.61.

However, motorists now scrambled to fill their tanks as long queues resurfaced in petrol stations.

The scarcity, at a time of a global rise in crude oil prices, shook the nation despite the assurance given by the Nigerian National Petroleum Corporation (NNPC) that there would be no increase in the ex-depot and pump prices of petrol this month.

In Lagos, petrol stations in Agege, Oshodi and Ikeja refused to sell with their gates locked.

Similar ordeals were experienced by residents of Otta, Ogun State; Ibadan, Oyo State; Ilorin, Kwara State, and in numerous other cities across the country.

Many Nigerians are now asking what the cause of their ordeal was since the NNPC had ruled out increasing rates.

The scarcity followed an earlier move by petrol marketers to disrupt the loading of petroleum products at private depots in Lagos and other parts of the country, in protest against a new payment method.