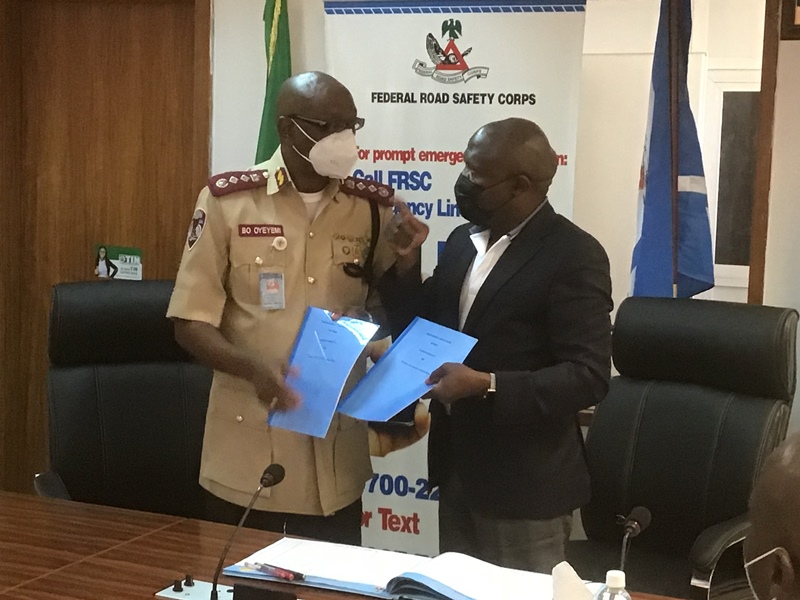 Guinness Nigeria PLC on Friday presented an app for e-learning to the Federal Road Safety Corps (FRSC) to tackle drink-driving on Nigerian roads.

The Managing Director (MD), Guinness Nigeria PLC, Mr Baker Magunda, presented the app to the Corps Marshal, FRSC, Mr Boboye Oyeyemi, at the signing of a Memorandum of Understanding (MoU) on drink-driving.

Magunda said the technology was developed to assist the corps in training and testing drivers and everyone who chooses to drive on Nigerian roads.

“We work with the government and other partners like the FRSC to target specific issue such as drink-driving or excessive driving, with programmes that try to positively change behaviour and reduce harm.

“As Guinness, we are happy to be leveraging technology in tackling drink-driving including the adoption of an e-learning responsible training module which will complement the curricular for training and testing of drivers.

“This new product will be deplored as an e-learning module and everyone who wishes to get or renew their driver’s license will be encouraged to undergo a short term educational tutoring on responsible drinking,” Magunda said.

According to Magunda, the e-learning module will enable people who want to become drivers or those who are looking to renew their licenses an opportunity to learn about drink-driving, as part of their certification for their licenses.

He added that the pilot scheme would be deployed first to appointed driving schools but that everyone would eventually be able to take the training on their smartphone and tablet in the comfort of his or her home.

Magunda said the company was more interested in saving the lives of their consumer than making profits and such would not relent in educating people on the side effects of consuming too much alcohol.

“It is only people that are alive that can buy our brands. So, keeping those who consume our brands alive and safe, is the only way we can sustain our business.

“We have a moral duty as those who produce alcoholic brands to ensure that we educate people on the side effect of consuming too much alcohol,” he added.

Speaking, FRSC Corps Marshal, Boboye Oyeyemi, said plans were on to train 4000 tanker drivers through NUPENG, with the help of the new application from Guinness.

“Guinness has offered to partner with the corps to carry out a comprehensive vision test for all the articulated drivers. Our previous test last year showed that 30 per cent failed the test.

“Hardly will you see an articulated vehicle driver wearing a pair of medicated glasses, so, does that mean that all of them have good sight than those of us who are wearing the glasses, no.

“So, Guinness will be providing the necessary equipment so that we can do a nationwide comprehensive test for drivers,” he said.

Oyeyemi said the app would be used to raise awareness on drink-driving. Furthermore, he noted that any effort deployed to save one life was worth it since life had no replacement.