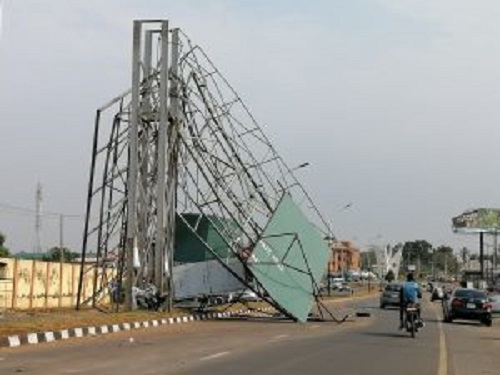 A billboard affected by Friday night’s heavy storm before Fate Roundabout in Ilorin.

A heavy rainstorm, on Friday, wreaked havoc on electric poles, cables, billboards roofs of houses in Ilorin, the Kwara capital.

A news correspondent, who went round the metropolis, on Saturday, reported that the storm affected mostly Fate, Tanke, Offa Road, Oko Erin, Taiwo and Gaa-Akanbi areas, where the storm hauled off roofs of houses and shops on major roads.

Although the level of destruction could not be immediately ascertained, many of the affected victims were seen on their sites and businesses, trying to find an immediate solution, especially of the debris that was strewn all over the place.