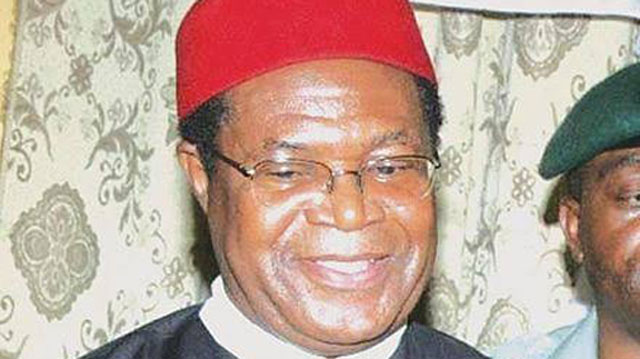 Elias Mbam, the Chairman, Revenue Mobilisation Allocation and Fiscal Commission (RMAFC) has described the late Chief Joe Nwodo as a detribalised Nigerian who committed his life to the service of the nation.

Mbam, in a tribute to the late political icon who passed to eternal glory at the age of 77 years described the deceased as a colossus and intellectual par excellence.

He said that Nwodo, an astute politician and lawyer explored his political sagacity to build bridges of unity among politicians and intellectuals that helped to deepen the political system of his time.

Mbam in the tribute on Saturday in Abakaliki said that Enugu State, Ndigbo and the Nigeria nation have lost ‘rare gem’ whose contributions to building a great Nigeria have remained legendary and unparallel.

“I learnt with grave sadness and deep feel of melancholy of the demise of our dear brother, Dr Joe Nwodo, especially as each time I remember him it is with fond memories of a man of unrivalled wisdom and unparalleled intellect.

“Nwodo was one Nigerian politician whose intelligence was as gigantic as his stature, and who unreservedly utilised this God-given talent in pursuit of a peaceful and united Nigeria.

“His vast knowledge of constitutional law was evident in his works and speeches and was deployed in his struggle for a Nigeria where everyone, irrespective of religion, tribe and status were equal before the law and equal beneficiaries of the entity that is Nigeria.

“I recall with nostalgia that as a frontline political aspirant, on the platform of defunct National Republican Convention (NRC), the late Nwodo carried himself with great candour, dignity and respect, and earned a place in my young heart and indeed in the hearts of many Nigerians.

“No wonder his younger brother, Chief Okwesilieze Nwodo won the Enugu State governorship election in 1992 after he was disqualified in the NRC primaries.

“That Dr Joe Nwodo will be sincerely missed is a certainty but I enjoin the Nwodo family, the good people of Enugu State and indeed the entire country to take solace in the knowledge that he has left lasting legacies.

“We are blessed to have Chief Nnia Nwodo and Dr Okwesilieze Nwodo as siblings of the late scion who are as equally gifted and are ever ready to contribute to national discourse and to the pursuit of a better Nigeria.

“May God rest the soul of Dr Joseph Nwodo and grant him the best place in paradise,” Mbam said.