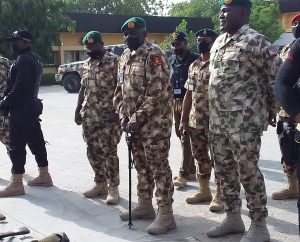 The Chief of Army Staff (COAS), Lt. Gen. Ibrahim Attahiru will spend the next one week in Borno State as part of his bid to raise morale and motivate troops fighting Boko Haram.

Attahiru disclosed this while speaking with journalists on Sunday in Maiduguri said his visit was to achieve results towards the total annihilation of Boko Haram and the insurgency.

He said a lot of successes had been recorded with many terrorists eliminated and weapons recovered.

“I am here on an operational visit; I will be here for one week.

“The essence is to enhance operations, raise morale and motivate the soldiers, to ensure we achieve better results towards the total annihilation of Boko Haram and indeed the insurgency, ” Attahiru said.

Already, COAS had visited troops of Sector 1 and Sector 2 of Operation Lafiya Dole in Borno and Yobe states.

He had also inspected some building projects at the headquarters of 7 Division, Maiduguri. (NAN)