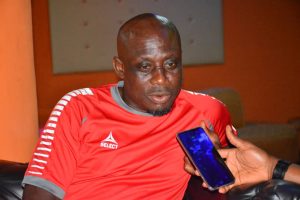 Ex-Super Eagles defender, Mobi Oparaku in an interview with NAN

Former Super Eagles of Nigeria defender, Mobi Oparaku, has called for sack of Gernot Rohr, the coach of the national football team.

Oparaku told the News Agency of Nigeria (NAN) on Monday in Ilorin that Rohr has nothing to offer the national team.

He called for the employment of a new coach was employed to change the current fortunes of the Super Eagles, arguing that Rohr lacks focus.

He also accused the German of perpetual experimentation with national team with his approach to invitation of players.

“I have taken my time to watch the players Rohr has been inviting, I cannot say these are the ones we can reckon with.

He noted that the coach has tested over 500 players since his arrival without a formidable team.

“I cannot stand and mention 10 to 15 players in the national team that will start and finish the game.

“Gernot Rohr, in the past five to six years has been building a team, he will change four, five, six players in every starting lineup.

“We cannot forge ahead or make any progress with such system. I am not convinced we can use such system to get what we want.

“Rohr is always rotating as if we are not Nigerians, we are not playing for the world, we are Nigerians.

“He does not have anything to offer, whenever he travels, he brings a player, he is just bringing everyone,” Oparaku added.

He also participated at the 1996 Olympic Games, where Nigeria won the gold medal as well as played in the 1998 FIFA World Cup in France.

Rohr is yet to react to this and similar allegations against him.