'It's becoming funny,' Wike reacts to abduction of schoolchildren 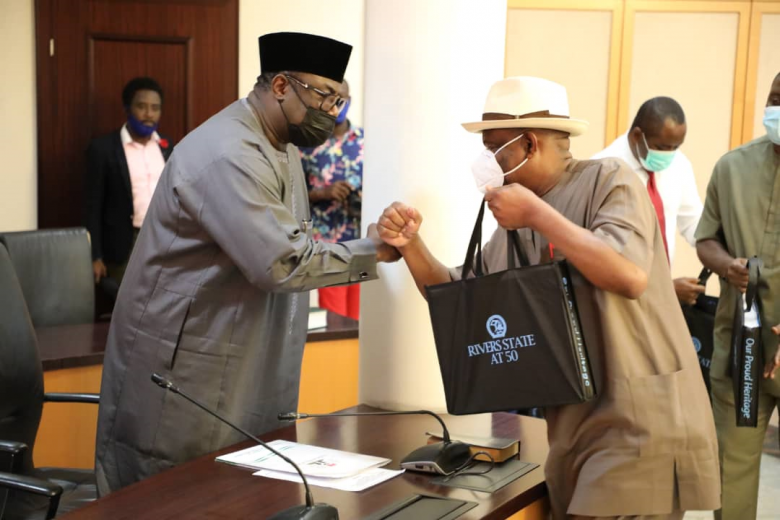 Governor of Rivers State, Nyesom Ezenwo Wike (right) presents a souvenir to the Minister of State for Agriculture and Rural Development, Hon. Mustapha Baba Shehuri during the latter's courtesy visit to the Government House, Port Harcourt on Monday, 15th of March 2021.

Rivers State Governor, Nyesom Ezenwo Wike, has described as ‘funny’ the spate of abduction and release of schoolchildren by alleged kidnappers in the Northern part of Nigeria.

Wike spoke during the visit of of Minister of State for Agriculture, and Rural Development, Mustapha Baba Shehuri to his office at Government House,  Port Harcourt, on Monday.

The Rivers State queried the reason behind the spate of abduction of children in succession and their release shortly afterwards.

“I saw breaking news, another banditry in Kaduna and taking away students and teachers. The thing is becoming funny. Yesterday, you take 300, two days after, they release them. The next morning, you take another one, the next 24 hours, they’re released.

“So, people know where they are. You take two hundred and something people in a 20 kilometres distance and nobody will know?  And in the next 24 hours they’ve been released. What’s really happening?

“Can somebody tell us the truth of what’s going on. It is becoming funny. And why is it so? It is so because we politicise the issue of security.”

The Governor also alleged that politics has been used to deny the state access to agricultural loans offered by the Central Bank of Nigeria.

The governor decried the situation where every issue in the country including agriculture has been politicised instead of implementing such policy dispassionately to achieve the intended food security and jobs for the youths.

“I think, I am one of those States that nobody gives loans for agriculture.  I don’t know what hatred the Central Bank Governor has for us?  We do not know.

“We have been hearing of ANCHOR borrower this and ANCHOR that. But when it concerns Rivers State, you will hear a lot of things.”

Governor Wike explained that in an idle situation devoid of politics, the Central Bank of Nigeria will partner with the Rivers State government to achieve the objectives of setting up the State owned cassava processing plant.

“Please tell the Governor of Central Bank to remember us too, that we are part of Nigeria. When we applied, they said this loan was N5 billion.  We have applied for more than 1year now. They said we should bring this and bring that.

“And we are telling you see the cassava processing plant that  you are supposed to say we will buy into this , we will support the State government. Nothing has happened.”

Governor Wike said even without the loans from the Central Bank of Nigeria,  his administration is achieving a revolution in cassava processing that will create jobs for youths and enduring patronage for farmer folks.

“It is not in dispute that to take the country out of where we are,  agriculture is key. If we are sincere with reality that agriculture will employ a lot of our youths; give them jobs and achieve food security,  then we must do it in such a way that we really mean what we say.”

The governor said the State government will invite the Minister of Agriculture to commission the cassava processing plant. According to him,  many companies have keyed in already to buy off what will be processed.

“We have over 3000  farmers who have registered. From them, the company will buy off all their produce. We are happy with this feat.”

Speaking further, Governor Wike expressed surprised over the road projects and provision of solar powered electricity that the Federal Ministry of Agriculture claimed to have provided to rural communities in the State.

He said it is important for the State government to know where those rural roads and solar power are located so that proper recording will be done and letter of appreciation written to thank the Federal Ministry of Agriculture for the gesture.

“I am also surprised when you said you’ve done rural roads in Rivers State. I don’t know the roads you did. It is important for us to know them so that we will put it on record, that the Federal Ministry of Agriculture did this road.

“And we will be able to write to you and thank you for doing such road. If you put solar, let us also know. Except you gave it to your party people. There is no way you will do road in my State without the State government being aware.”

Minister of State for Agriculture, and Rural development, Mustapha Baba Shehuri said he is in the State to inspect ongoing and completed projects that will boost rural agricultural activities under his ministry.

He said the federal government is poised to support Rivers farmers with new technology that will address the problems of low yields, allow them have access to improved varieties of cassava produce,  chemical for treatment for the seeds and crops protection.