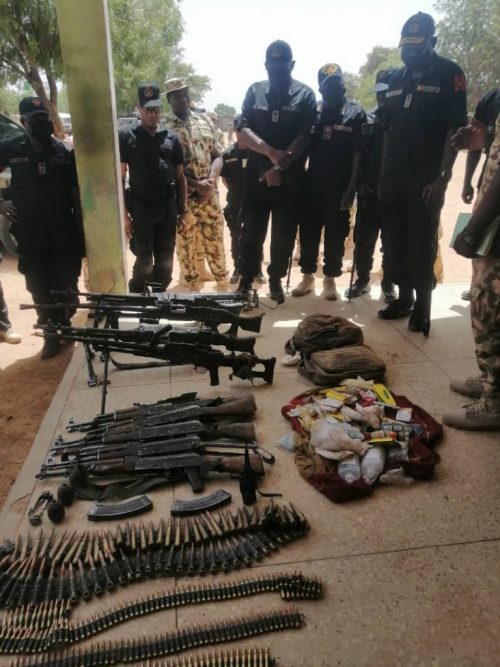 However, Nigerian troops lost three soldiers and one officer in the encounters.

The Director, Army Public Relations, Brig.-Gen. Mohammed Yerima, disclosed this in a statement on Monday in Abuja.

He didn’t speak on the reported Gudumbali ambush, where ISWAP claimed it killed 15 Nigerian soldiers.

Yerima said the encounters, which took place around the fringes of the Tumbus of Lake Chad region also led to the destruction of terrorists’ gun trucks and recovery of large cache of arms and ammunition.

He said that the combined troops of Sector 2 advanced and cleared Daban Massara and Ali Sherifti villages among other settlements before they harboured for replenishment and retrofitting along the axis.

The army has begun the second phase of their operations and advancing along the Kukawa – Monguno road.

About 14 kilometres to their base, they sighted terrorists’ gun trucks and swiftly commenced pursuit with heavy fire and deft manoeuvre

“In the course of the hot pursuit which was aided by air cover provided by the Air Task Team of Operation Lafiya Dole, several terrorists were neutralised and their gun trucks destroyed.

“Unfortunately however, one officer and three gallant soldiers paid the supreme sacrifices while those wounded in action are currently receiving medical attention at 7 Division Medical Services and Hospital in Maimalari Cantonment.

“Above is on-the-spot account of the encounter between Nigerian troops and the Boko Haram/ISWAP terrorists in Mugono area and environs.

“Members of the public are assured that the troops are on top of the situation and working assiduously to end the insurgency and terrorism in country in line with the directives of the Chief of Army Staff,” he said.