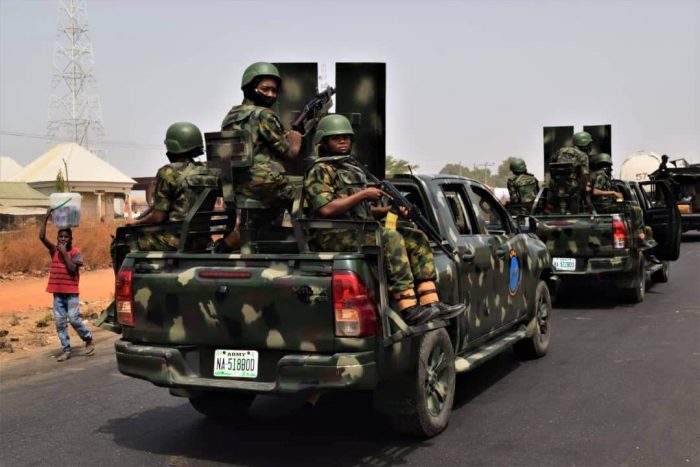 Nigerian Army says two ring leaders of IPOB/ ESN were arrested during a raid in Mgbowo community in Awgu LGA of Enugu State.

Aruwan stated this at a press conference while giving an update on the attack by armed bandits at the school.

He, however, confirmed that three teachers were kidnapped. He listed the teachers’ name as Rabiu Salisu, Umar Hassan, and Bala Adamu.

Aruwan said the bandits rode on motorcycles into the school at about 8:50 am, and also rustled cattle after invading the school.

“Pupils who had just arrived at the school to begin the day’s activities, took to their heels in the course of the commotion, as the bandits invaded the premises on motorcycles. This led to two pupils going missing, identified as Ahmad Halilu and Kabiru Yahaya.

“However, we are happy to inform you that the two missing pupils have been found. We can also confirm that no single pupil was kidnapped from the school.

“Other than the three teachers previously mentioned, no staff or pupil of the school is missing following the attack.

“Security reports have also revealed that the bandits rustled several cattle and went away with five motorcycles and other valuables.

“In summary, as it stands, three teachers of the Rema Primary School, Birnin Gwari LGA have been kidnapped, and following thorough checks, we can verify that no pupil was kidnapped.

“The Military and other security agencies in the Birnin Gwari general area are in hot pursuit of the bandits to ensure that the three kidnapped persons are rescued safely.

“Similarly, troops of the Nigerian Army on patrol in the Faka general area of Chikun Local Government Area rescued a young boy wandering in the Faka Forest.

“The boy, identified as Adewale Rasaq, was kidnapped over a week ago in the Kudenden area of Chikun Local Government, and escaped from his captors while his parents were negotiating the payment of a ransom of about 15 Million Naira to the bandits.

“Furthermore, troops of the Nigerian Army while on aggressive fighting patrol in a forest around Kachia and Kauru Local Government Areas found a girl, Fatima Lawal, who also escaped from bandits.

“According to her statement, she was kidnapped about three weeks ago at Randa village, in Kadage general area of Kauru Local Government.

“These two persons will be handed over to their families through the Chairmen of Chikun and Kauru Local Government Areas respectively.

“Overall, the Kaduna State Government is sustaining collaborative efforts towards tracking down the criminals and retrieving their hostages. The Governor is actively engaging critical stakeholders towards the speedy achievement of this objective.

“Citizens are encouraged to assist the efforts of the Government by volunteering useful information to the Kaduna State Security Operations Room, on 09034000060 and 08170189999.”