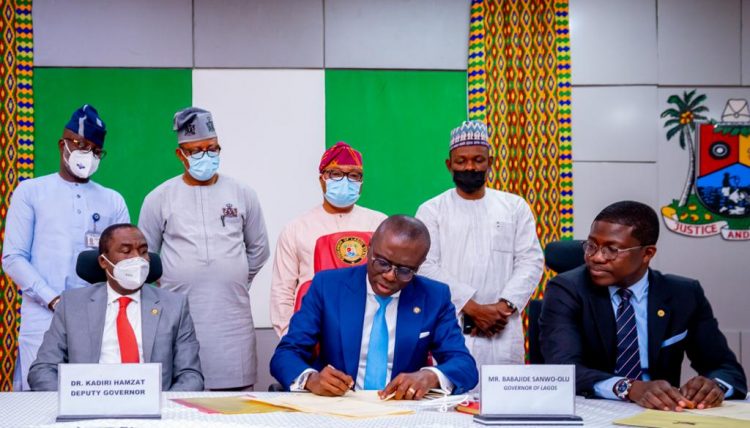 Governor Babajide Sanwo-Olu of Lagos State on Monday signed the bill for the Prohibition of Unlawful Societies and Cultism of 2021 into law, approving 21-year jail term for convicted cultists in the State.

The State’s House of Assembly, in February, passed the anti-cultism bill, which also stipulates 15-year jail term for anyone found guilty of abetting cultists and residents who willfully allow their properties to be used as meeting points by cultists.

Sanwo-Olu assented to the bill at the swearing-in event for newly appointed members of the State’s Public Procurement Agency Governing Board and two Permanent Secretaries held at Banquet Hall in the State House, Alausa, on Monday.

At the event, the Governor also signed three other bills into law. They are Lagos State Audit Service Commission (Amendment) Law of 2019, Lagos State Public Procurement Bill of 2021 and Coronavirus Pandemic Emergency Law of 2021.

The anti-cultism law repeals the Cultism (Prohibition) Law of 2007 (now Cap. C18, Laws of Lagos State of Nigeria, 2015) and provides for more stringent punitive measures, as well as makes its application all-encompassing and applicable to the general public, as against the restriction of the previous law to students of tertiary institutions.

Sanwo-Olu said the State had suffered the negative effects of unlawful societies and cultism, stressing that the new law sought to make parents more responsible and show more interest in the up-bringing of their children and wards to ensure that they do not become a burden to the society.

Speaking on the appointment of the procurement agency’s Governing Board members, the Governor said their selection was predicated on their track record of integrity, experience and professional competence.

He said the Board’s duty was to oversee the procurement process, by ensuring that public funds were judiciously expended in manner that would promote accountability, transparency and value for money.

Sanwo-Olu said: “Your major responsibility as members of the Public Procurement Governing Board is to ensure strict adherence to the provisions of the State Public Procurement Law. You hold a crucial and strategic role in preventing wasteful spending and corruption in public procurement. The State Government and taxpayers count on you to keep the procurement process as transparent as possible.”

The Governor said the appointment of the two Permanent Secretaries into the Ministry of Works and Infrastructure was part of the move to restructure the ministry into two distinct offices, as necessitated by the need to engender improved efficiency and faster delivery of key projects under the purview of the Ministry.

“I challenge you to utilise your wealth of knowledge and experience for the expedited and seamless delivery of works and infrastructure projects; you must ensure that we achieve our purpose for restructuring the two offices,” Sanwo-Olu charged the appointed Permanent Secretaries.

The bill to amend the State’s Audit Law of 2015 was initiated by the executive to address observed flaws hindering the successful implementation of the extant Audit Law, Cap. A13, Laws of Lagos State, 2015.

With the amendments, the Central Internal Audit (CIA), which was a department in the Ministry of Finance is now a department under the Audit Service Commission. This is to bring auditors under one body for effective administration and independence of internal auditors in line with best global practice.

Lagos State Public Procurement Agency Law originally enacted in 2011, forms the legal bedrock for the public procurement regime in the State. The Law was based on the United Nations Commission on International Trade Law (UNCITRAL) model which is a properly regulated procurement system standard on international best practice.

Each Governing Board’s member has a term of three years to serve in the Board.