This month is no different with 18-years-old, Babs Cardini, one of Nigeria’s most well-known magicians who regularly films himself performing magic tricks with people at different locations. Nigerian singer Legendary Styles’ #iseeisaw challenge videos have also been viewed more than 11M times.

Babs Cardini’s Magic Will Amaze You

At only 18-years-old, Babs Cardini is one of Nigeria’s most well-known magicians who regularly films himself performing magic tricks with people at different locations. His performances range from simple card tricks to more complex optical illusions that are sure to leave you amazed. Taking his love for the magic to TikTok, Babs is constantly sharing new tricks which appeal to a wide group of people due to its versatility. Since joining TikTok in 2019, he has built a followership of over 35K and does not seem to be slowing down.

Jhennie Jae Is The Queen Of TikTok Challenges

I bet you’ve heard of the slo-mo challenge that exploded on TikTok! Its popularity saw many creators jump onto the trend with the hope of growing their followings. It was the case for local creator, Jhennie, who was one of the earlier adopters of the trend, using it to amplify interest in exciting Nigerian music. In addition to enjoying trends and challenges, Jhennie also shares happiness and positive vibes with her audience which currently sits at more than 55K followers.

It all started with one simple question: “If you had one million Naira now, what would you invest in?” Cheekily, one creator responded that he would buy Suya (skewered beef that is a Nigerian staple).

This ridiculous and funny feedback sparked the viral One Million Naira sound trend this past month on TikTok. Since the original sound landed on the platform, it has become a popular soundtrack used by Nigerian TikTok creators including, former Big Brother Housemate, Trikytee, and popular creator, Jenni Frank.

The sound received over 12K video creations in the first seven days and has more than 29K creations to-date coming from users all over the world.

The BGC Drama Effect is a viral meme soundtrack that sees people make over-the-top comments in response to silly remarks facilitated by a dramatic soundtrack. It has attracted tens of thousands of people to join the challenge across Nigeria, with more than 9K local recreations recorded in the first seven days and total video views reaching over 2.5B globally. Jessiekaey1 and DaalaOruwari were two local creators who jumped onto this challenge. Don’t forget to check it out! 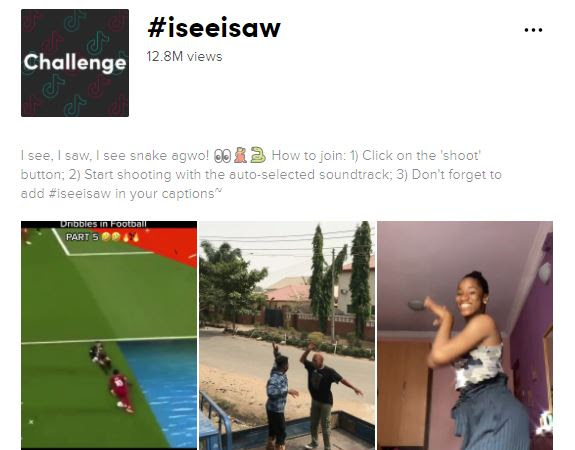 Inspired by the global sounds of drill music, a Nigerian musician named Legendary Styles has made a song titled “Looseguard”.

The refrain of the song (I see, I saw) has become a popular sound on TikTok and has led to the launch of the #iseeisaw challenge which has been viewed more than 11M times. From malls to school campuses, the viral song has been filmed in many locations and by many creators. Two creators who took part in the challenge were Estheruzodinma and Mikeyclara_.