How Police crippled me over N100 - Ogun petitioner 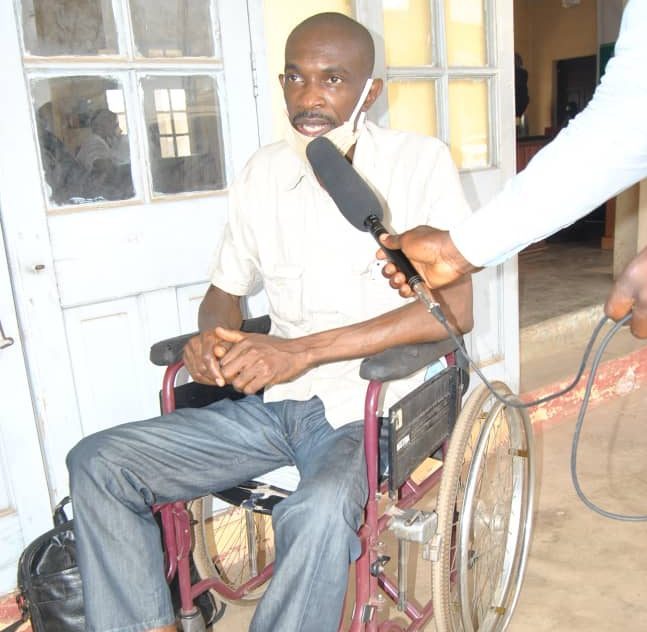 Mr. Olasunkanmi Fagbemi, a 45-year old petitioner who appeared before the Ogun State Judicial Panel of Investigation on Police Brutality, Human Rights Violations and Extra Judicial Killings on Monday has recounted how he met the disaster of his life which crippled and dashed his hope of naturally impregnating a lady.

According to the petitioner, “I was travelling to Ibadan on the 18th August, 2010 in a public transport bus at about 7pm. Policemen at the checkpoint between Fidiwo and Alapako area of Ogun State on the Lagos – Ibadan Express stopped our bus, collected N100 from the driver after asking him to park properly.

“After parking, the driver got down for his change. While we waited, a police officer at the other side of the road just fired at our bus, the bullet hit me on the neck and turned down to lodge into my spinal cord. When the police officers realised the devastating effect of their action, they fled the scene with their vehicle.

“I became unconscious and was rushed to University College Hospital (UCH), Ibadan by the driver and other passengers in the bus where I was admitted for surgery and the bullet was extracted from my spinal cord after four days”.

The petitioner added that he had written severally to different authorities concerned and even to Commissioner of Police, Ogun State Command, after which two police officers were sent to investigate the matter but ever since then, over 10 years ago, nothing was done.

Fagbemi revealed that being the breadwinner, it had been so difficult because he had spent millions of naira on medical care, flown to India for treatment, sold properties and belongings on the matter and above all, have been confined on wheel chair due to the spinal cord injury.

The petitioner, who disclosed that he was preparing to get married when this unfortunate incident happened said he has no child yet and has been told medically that it would only take in vitro fertilization method for him to father a child now.

The Panel Chairman, Justice Solomon Olugbemi while reacting disclosed that a letter would be written to the Ogun State Commissioner of Police to release Officers in Charge of Legal and X-Squad departments to appear before the Panel with all necessary documents to give evidence. The petition was thereafter adjourned to April 1, 2021 for further hearing.