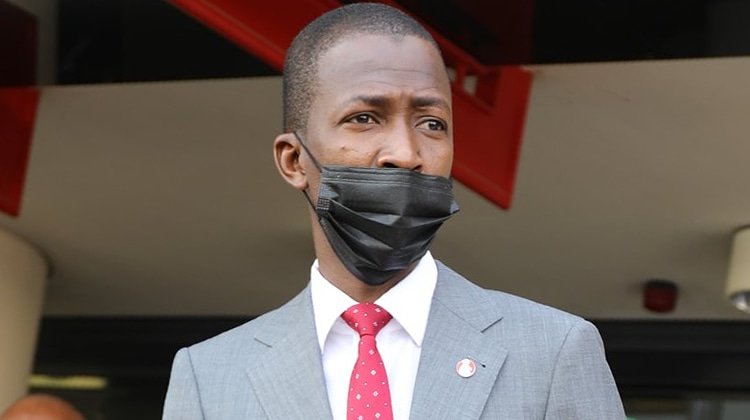 Abdulrasheed Bawa, new chairman of the Economic and Financial Crimes Commission gave bankers a warning shot on Tuesday about his agenda.

This was when he reminded them of a 1986 act that demands they declare their assets.

He made the statement on Tuesday at the Presidential Villa in Abuja, after meeting President Muhammadu Buhari.

It was being speculated that the issue of applying the law may have cropped up in his talks with the President.

In the EFCC statement thereafter, the law was copiously quoted.

This obviously made it needless for the debate on the rightness or wrongness of Bawa’s call, as shown by a Twitter thread Wednesday.

According to the EFCC statement, Bawa’s call is grounded on the Bank Employees, ETC. (Declaration of Assets) Act 1986.

The act was part of measures, the EFCC said, to sanitize the nation’s financial system and block some of the loopholes being exploited by unscrupulous players in the sector to undermine Nigerian economy through money laundering and illicit financial flows.

Non-implementation of the law may have caused the series of bank failures in the 90s, leading to the Failed Bank Tribunal of the Abacha era.

Thereafter, also came the meltdown of the sector in 2008, which punched a N5trillion gorge in the Nigerian treasury.

Section 1 of the Bank Employees, ETC. (Declaration of Assets) Act 1986 makes it mandatory for every employee of a Bank to make full disclosure of assets upon employment, and annually in subsequent years.

The law under Section 7 (1) stipulates that “It shall be an offence for an employee of a bank to own assets in excess of his legitimate known and provable income”.

The penalty for violation of the Act, as spelt out in section 7(2) includes imprisonment for a term of ten years.

“Any employee guilty of an offence under subsection (1) of this Section shall on conviction be liable to imprisonment for ten years and shall, in addition, forfeit the excess assets or its equivalent in money to the Federal Government”.

Why then the controversy on an issue as clear as crystal?

The law has been in existence for 35 years and has been one of those laws buried in the graveyard of the Ministry of Justice or the Police.

It is doubtful if bankers have been complying with its provisions for more than three decades.

Bawa may just have dredged up the law to remind bankers they will be under watch, during his chairmanship of the anti-graft agency.

A manager in one of the top banks in the country told P.M.News on Wednesday that he heard of the law for the first time on Tuesday.

Yet the law became operational from 26 September 1986.

In its citation, it gave the President of Nigeria, the sweeping power to extend its application to other categories of persons.

Officials of the Nigerian Customs Service are also covered by the law. They are expected to make asset declaration, according to Section 12.

As it applies to bankers, Section one of the law expressly states: Every employee of a Bank shall, within fourteen days of the commencement of this Act, make a full disclosure of all his assets.

Section 1, sub section 2 says: In the case of a new employee, he shall within fourteen days
of assuming duty with the Bank make a full disclosure of all his assets at the time of his assuming duty; and for the purpose of this subsection, a transfer or secondment from
one Bank to another shall be treated as a new employment.

The law contains samples of asset forms to be filled by all categories of bank staff.

It also explains who should handle the forms, after being filled by employees.

According to the law, the forms are to be submitted to the bank’s CEO.

The CEO will then submit the forms to the Secretary to the Government of the Federation, who will in turn submit them to the appropriate government agency for verification.

“The appropriate authority shall cause to be verified every Declaration of Assets Form and Annual Assets Declaration Form submitted under this Act and may direct that a thorough
investigation should be conducted into the assets and activities of the employee concerned including the assets and activities of his spouse, child, relative, parent, associate or privy”, says Section 6.

Bankers should get worried about Section 7, which prescribes a 10 year imprisonment for unjust enrichment, in addition to forfeiture of the illegal assets.

Bankers who made false asset declaration will also go to jail for 10 years.

Their friends, spouses or fronts will be committed to prison for seven years, according to Section nine of the act.

The act is couched so succinctly. It is a huge surprise it has been forgotten for so long in the statute book.