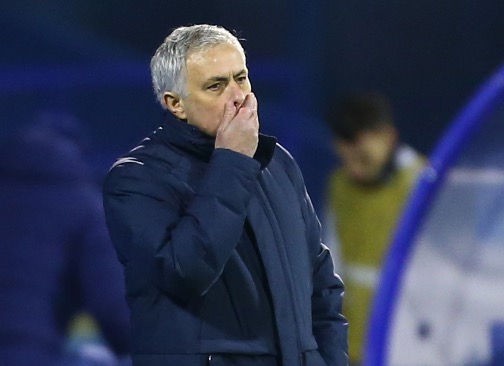 Tottenham coach Jose Mourinho has blamed the attitude of his players for the shock exit from the Europa League.

Tottenham came into the second leg with two goals in the bag, but squandered all within 28 minutes.

They allowed Dinamo Zagreb’s player, Croatian Mislav Orsic levelled up the score in regulation time and score the winner in extra time, for a hat trick.

Mourinho was exasperated by the way his players allowed qualification to slip away and made the unusual step of praising the Zagreb boys in their dressing room.

Mourinho who spoke at the end of the match said he felt more than sad.

‘In the ninety minutes and first half of extra time, there was one team who decided leave everything on the pitch, they left sweat, they left energy, they left blood.

‘In the end of the game they even left tears of happiness. Very humble, very committed and I have to praise them.

“On the other side, my team that didn’t look like it was playing an important match.

“If for any one of them it’s not an important match… for me it is, for the respect I have for my own career and my own job.

“Every match is an important match for me.

‘I believe for every Tottenham fan at home every match matters. Another attitude is needed.

‘To say that I feel sad is not enough. What I feel goes much further than sadness”.