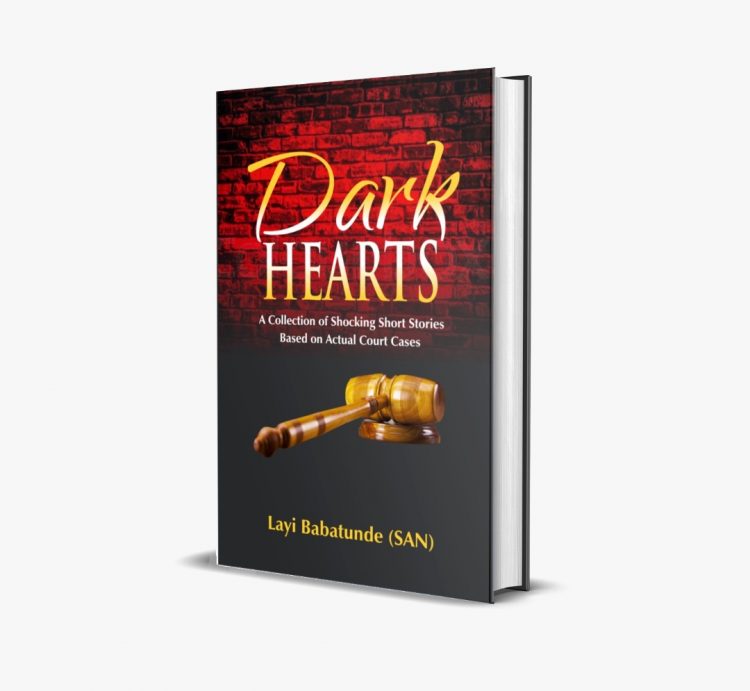 As in William Golding’s classic novel, Lord of the Flies, Layi Babatunde, exposes the capacity of man for untold evil in his newly released Dark Hearts.

That said, there are two significant differences in the premises of these two works.  While Golding explores how the sudden absence of a supervisory authority and governing law turn lads, hitherto innocent and believed to be devoid of the devious tendencies that attends the experience of growing up, into dangerous savages; Dark Hearts dwells on the willful and unbridled planning and execution of evil by adults.

In addition, while Golding’s evergreen novel is pure work of fiction, which may have been inspired by some actual events, Babatunde’s work are reports of actual life events uncovered in the application of the laws of Nigeria.

In Dark Hearts, Mr Babatunde, a Senior Advocate of Nigeria, who has been in legal practice for close to four decades, brings into the open, in simple prose, what would otherwise have been buried in Law Reports and other legal literature. He delivers a chilling account, which would make you ponder, on the increasing loss of humanity amongst humans.

Evidently aided by the legal luminary’s well-known interest in scholarship and incursion into law reporting, through the Supreme Court Reports (S.C Reports) which he has edited and published for decades; Dark Hearts is a collection of 12 short stories based on actual life occurrences, leading to prosecution under the Laws of Nigeria and decisions rendered up to the Apex Court. The case references or citation are in the End Note.

And as the author says in his introduction, some of the revelations in the collection would make the average person shudder at man’s limitless capacity for evil. The stories distilled from cases decided by the Supreme Court at diverse times, also amply tells that the pervasive cold-heartedness and lack of fellow feeling with which Nigeria currently grapples may in fact be as old as humanity itself, Indeed Nothing is truly new!

From murder to armed robbery to kidnapping, ritual killings and even the desecration of worship places in the perpetration of evil for selfish gains, Nigeria is only currently seeing an escalation rather than a novelty.

And I would imagine that this is one of the concrete benefits that this timely book does for us as a people. By jigging our consciousness and reminding us that, we have as a people always had a tendency to jettison blood ties and affinities and sacrifice a brother and sister for the sake of becoming rich, Dark Hearts, give sociologists and psychologists in Nigeria a task more intense than the general assumption that the current economic downturn and government’s inability to actualiseshared prosperity amongst its 200 million citizens is what is turning us into money mongering savages.

This is one of the myths that Babatunde busts in his collection of stories. In one of the stories, Brother Kills Brother, a man leaves Kano, in the north-west of Nigeria all the way to Iwo, in the south-west to source for a hunchback required for a money ritual for some men who were desperate to be rich.

And you wonder at the depth of darkness of this man’s heart when you realise that he merely facilitates evil for people other than himself and that the hunchbacked man he was ready to sacrifice is his own younger brother!

You are also confronted with issue of unsafe school environment, the kidnapping of children either for ransom or ritual purposes.  In Ex-employee from Hell, a former domestic staff kidnaps the son of his old employer from school for a ransom; the story does not end well. The story in Gruesome Murder of a Child is similar expect that this time around, the crime was masterminded by an uncle, who knew the itinerary of the abducted child’s parents. Again, the motive was money ritual.

And then you have a variety of stories dwelling on armed robberies, murders, and kidnapping (including that of a magistrate), and betrayal. A memorable one is the story entitled: Band Manager Kills Band Leader, which would resonate with people conversant with the story of a popular musical artist who was murdered in south-west Nigeria about four decades back. And for this artiste, it seems 2020/2021 is unwittingly commemorative given the fact that production work has just been completed on feature film by the legendary filmmaker, Tunde Kelani.

Given his pedigree with the Supreme Court Reports, questions could be raised as to whether Dark Hearts is an extension of MrBabatunde’s contribution to the documentation of case law in Nigeria. This is more so because many of the stories in the collections went as far at the Supreme Court for final determination.

This question would not be far-fetched because in a sense; this book, in spite of the attempt to introduce elements of fiction into it, tells of the tenacity and consistency of the legal system in Nigeria. From the trial court through to the supreme court, the flavour of judgment was largely consistent, something which lends credence to the competence of Nigerian judges in spite of increasing public disaffection.

It is clear though that the author did not set out to do a work of fiction in the fashion you would find a John Grisham novel. A ready evidence of this is in the fact that the title of some of the stories, leave little or nothing for imagination as you would expect in fiction. For example: does Gruesome Child Murderand Murder in Church not already tell you most if not all of the story? Lol

The good thing however, is that the writer does not pretend to be giving Nigeria a work of fiction.  The registers, style, mood, and pace employed in all these stories are largely reportorial and serve the purpose of reminding Nigerians, that the heart of man has always been “desperately wicked.” Lessons obviously can be learnt, from the stories and their outcome that evil does not pay! In addition to that, Mr Babatunde does one more thing for Nigeria: bringing legal stories into print in the mode of true stories that flirt with fiction. I bet that he just threw open a new window of opportunities that many, including yours truly, already peep through.