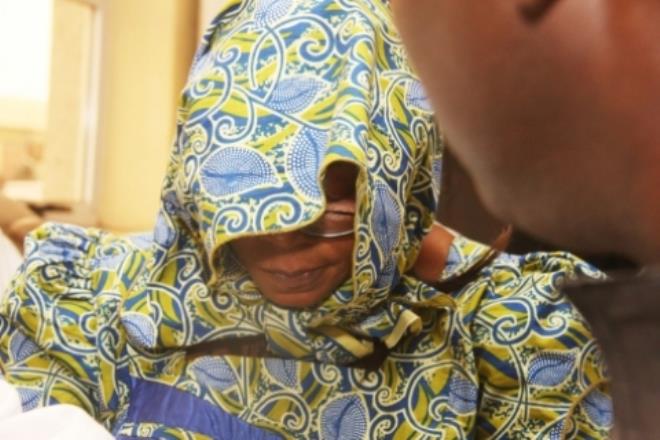 Veronica Ulonma Onyegbula, a.k.a pure water seller, one of the persons accused of stealing N24billion police pension fund, bought a property in Abuja in her daughter’s name.

The property was bought at N54.9million, said prosecution witness, Mustapha Sani Gadanya, a former staff of the EFCC.

The testimony came as the protracted trial of the former director of Police Pension Office, Atiku Abubakar Kigo, Onyegbula and four others continued before Justice Hussien Baba Yusuf of the FCT High Court, Maitama, Abuja, on Wednesday.

Led in evidence by Rotimi Jacobs, SAN, Gadanya provided further insight into suspicious cash flows into the account of Onyegbula and how she bought the Abuja property.

Veronica Onyegbula’s daughter was a student at the time.

Gadanya told the court that following the review of one of the accounts, Ulover International Resources Ltd, marked as Exhibit P42a, which is a United States Dollar account, it was discovered that the account had a turnover of $700,000.

The witness said that a balance of $534,816.84 was left in the account at the time it was forfeited to the Federal Government on interim basis.

During interview with the investigators, Onyegbula claimed she made the $534,816.84 from sale of pure water.

Addressing the Court on the account opening package marked Exhibit P41, the witness said the investigative team discovered that the 3rd defendant, Onyegbula, was the sole signatory to the account, Ulova International Resources Ltd, as the Managing Director with address stated as Plot 140, 142 Ehimiri Housing Estate Umuahia, Abia State.

“The application for the account to be opened was made by the 3rd defendant; the company itself was registered on November 17, 2004 while she was still a serving officer at the Police Pension Office”.

The witness disclosed that following the execution of a search warrant in the house of the 3rd defendant at No. 3 Andora Street, Sun City Estate Abuja, it was discovered that the property was constructed and sold by a company named Adkan Services Limited.

“We sent a letter to the company, demanding for documents relating to the property and evidence of payment to ascertain how the property was purchased, to which they responded.

“Following the review of the documents, we discovered that on February 23 2009, Adkan offered the property, a four-bedroom duplex for N61,050,000 to Onyegbula in the name of her daughter.

The Pw4, however called the Court’s attention to the fact that Amarachi was cited in the document as a businesswoman, whereas investigations reveals that she was still schooling at the time.

“We also discovered that Amarachi’s signature was inconsistent with the one in the statement form she signed at the EFCC and application form. Only her initial were used as the signature (A.O.A).

The purchase agreement was signed by Danlami Audi as witness.

“Because of the discovery, we went to Wema bank to ascertain the account from where payments for the property was made.

“We discovered that Ulova International Resources Ltd was the account that made the payment; they have about 5 accounts with Wema bank.

“We also came across some managers’ cheques with no details of beneficiaries, we now wrote back to the bank to furnish us with the original instructions which they did”.

Prosecuting counsel, Jacobs attempted to tender the documents in evidence but Ise Ikeji, counsel to the Onyegbula, objected.

Jacobs however urged the court to accept the documents in evidence, stating that the reply letters were signed by the bank and recovered in the course of investigation by the witness.

He said the documents satisfied the requirements of the law as there is a certificate by the Bank for the statement of accounts.

Justice Baba-Yusuf adjourned till May 26 and 28, 2021 for ruling and continuation of the trial.

The trial began in 2011, with the accused charged with stealing N14.5billion from the Nigeria Police Pension Fund.

The money, domiciled at First Bank of Nigeria Plc, was said to have been diverted by the accused persons while they were supervising the funds.

Exactly a year later, between January 2010 and February 2011, Atiku Abubakar Kigo replaced Esai Dangabar in the scam and they jointly accessed, fraudulently, another sum of N4.740 billion again from the Funds.

On the 31st of January, 2011, they all gathered together, all the six of them, for yet another trip to the treasury and were alleged to have helped themselves to another N656.56 million.