Yusuf out, Ogunlade in as MNJTF commander in Ndjamena 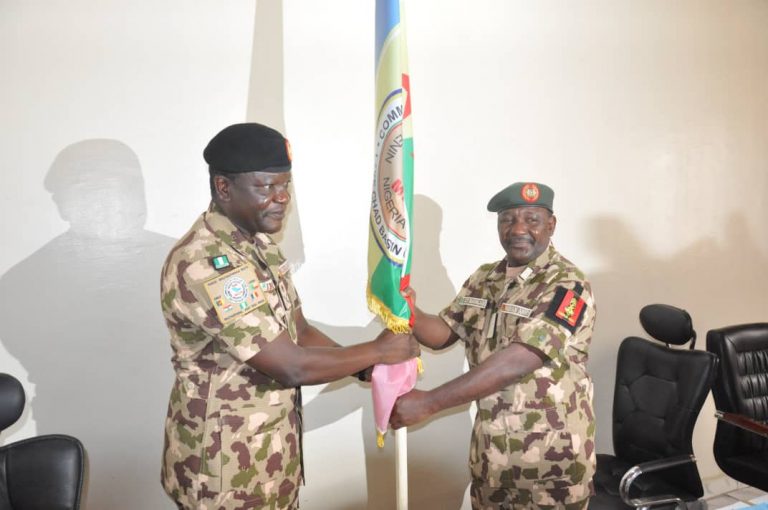 Maj. Gen. Jeleel Ogunlade takes over from Yusuf in MNJTF

The handing over ceremony held in N’djamena, Chad on Friday.

Chief of Military Public Information Officer for MNJTF, Col. Muhammad Dole, said this in a statement.

The new commander commended his predecessor for his commitment and service during his tour of duty.

He stressed the need for continuous cooperation and collaboration between the MNJTF and all its partners.

He assured members of staff that he would be open for dialogue, adding that he is committed to all efforts at ensuring the end of insurgency in line with the mandate of the force.

Yusuf lauded the Military Staff Officers for their support and dedication to duty and urged them to extend same to his successor.

He expressed sincere appreciation to the people and government of Chad as well as the various military authorities in Chad for their support to the force over the years.

Yusuf further acknowledged the strategic guidance of the Executive Secretary, Lake Chad Basin Commission, Head of Mission MNJTF, as well as support received from the African Union and EU, among other partners.

He also appreciated the Air Mobility Support, Petroleum Oil and Lubricants (POL) support and the Command, Control, Communication and Information System support currently being provided by the EU.

He further lauded support of the CCL, Operations BARKHANE and the U.S Team in Diffa for their contributions toward the attainment of several operational successes of the force.

According to the statement, representatives of the various MNJTF partners present at the ceremony extolled the exceptional command and leadership style of Yusuf in steering the affairs of the force.

“While some made their remarks verbally, others presented written goodwill messages to Yusuf, expressing their sincere appreciation for the great level of cooperation and collaboration shared with the MNJTF during his duty tour as FC.

“Notably, the representative of UNDP, Mr Kamil Kamaludeen, praised the various initiatives adopted by Yusuf to ensure the effective application of non-kinetic measures to complement the kinetic operations of the force.”

The ceremony was graced by esteemed guests and representatives from the EU, United Nations Development Programme (UNDP) African Union, Centre for Coordination and Liaison (CCL) and media proprietors, among others,” it said.

Yusuf has been appointed the Chief of Operations, Nigerian Army Headquarters.