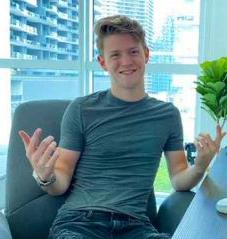 The definition of “success” is difficult to pin down. The Merriam Webster Dictionary defines success as attaining favor, wealth, or eminence.

However, for each person, the term success carries different connotations.

Today, YouTube is among the most popular social platforms, with Statista mentioning that up to 2 billion users log into it monthly. For social media creators on the forum, success may come in different metrics, either through the number of views generated or by the volume of money they earn from their videos.

Becoming a YouTube entrepreneur used to be something teachers laughed at when kids mentioned their goals, yet today these entrepreneurs make thousands of dollars a month on the platform.

Caleb Boxx, a young business owner who pioneered a new way of approaching the YouTube business, speaks about his success.

Starting From the Basics
Caleb Boxx may be young, but he’s a YouTube entrepreneur unlike any other. He’s the mastermind behind a system called YouTube Automation. Caleb’s design takes the complicated world of YouTube marketing and boils it down to its core elements, teaching new entrepreneurs the best way to approach the business.

The result is a scalable, profitable YouTube company built on loyalty, trust, and dependability within its ranks. Through his own research, experimentation, and sometimes failures, Caleb has constructed the system to ensure that anyone can use it.

What Does a YouTube Entrepreneur Need to Have?
Caleb mentions that to be a YouTube business owner, an individual must value hard work and dedication, and they must learn quickly while pivoting into new trends.

Caleb’s insight into the world of YouTube began when he teamed up with a few of the platform’s most prolific creators. He realized that their success came from their dedication and ability to keep producing great content.

However, he realized that topics of discussion on specific niches tended to ebb and flow. For consistent income, a YouTuber needs to tap into other issues that might not be the core ones that they initially envisioned.

YouTube Automation uses a methodology that leverages the skills of professional producers to create constant, high-quality content. Therefore, an entrepreneur needs to have a reliable team to support their dedication, passion, and hard work.

Finding the Right Niches
As mentioned before, YouTube is about leveraging one’s passion in the topics that one is most passionate about. But how does anyone know if they’re passionate about something? The physicist Isaac Newton is quoted as saying, “What we know is a drop, what we do not know is an ocean.”

Caleb suggests that new, budding entrepreneurs explore the world around them before setting foot into the business of YouTube. He advises them to split up a year into two-week segments and then delve into something new during each segment.

At the end of it, they should select those that bring the most joy to them; having those as their focus will improve the level of success of their YouTube career. He also encourages newcomers to find a robust and reliable team since a business is only as strong as its bonds.

Caleb’s own goal is to expand his network to 100 channels, and he’s well on his way to doing so.