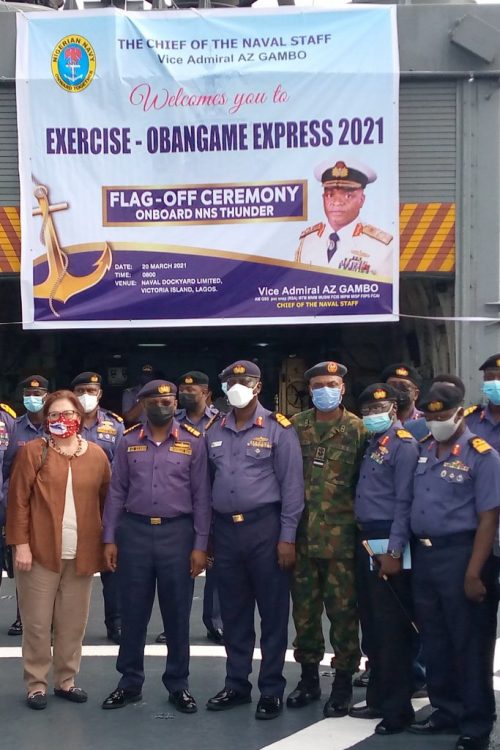 Nigerian Navy has flagged off Exercise Obangeme Express to address piracy challenges in the Gulf of Guinea.

The yearly exercise is in its 11th edition.

The exercise was flagged off aboard the Nigerian Navy Ship (NNS), THUNDER, at the Naval Dockyard, Victoria Island, Lagos.

Gambo said that the exercise Obangeme is an annual multinational maritime exercise borne out of the need for Gulf of Guniea navies to work together for regional maritime safety and security.

“This is as a result of the huge resources and vast potential being continuously undermined by multifaceted domestic and cross border threats.

“This challenges the dwindling prosperity of member states,” he said.

The CNS said that the exercise would present an ample opportunity for the Nigerian Navy to work together with other national and regional navies in the spirit of the Yaounde Code of Conduct.

“This will enhance the collective capabilities of Gulf of Guniea and West African nations to counter sea based illicit activities.

“It will also enhance the operational capability of the Nigeria Navy in its fight against various forms of maritime crime through information and intelligence sharing,” he said.

Gambo said that the sustenance of this exercise was critical to Nigeria’s national interest, given the huge contributions of the nation’s maritime resources to national prosperity and development.

“The exercise Obangeme aims at contributing to the freedom of navigation in the Gulf of Guniea by strengthening coordination in the fight against insecurity for socioeconomic activities among member states to thrive.

“This is in line with the Nigerian Navy mandate and other treaties which Nigeria is a signatory too,” he said.

The CNS appreciated the Government of the United States through the U.S. African Command and other international partners for facilitating and sustaining Exercise Obangame Express over the years.

Gambo also thanked President Muhammadu Buhari, for his untiring support to the development of the Nigerian Navy.

“The exercise is an avenue for participating nations within the Gulf of Gunea and its international partners to collaborate toward addressing maritime security concerns toward the gulf.

“The exercise comes against the backdrop of piracy cases, illegal fishing, illegal exploration of mineral resources, proliferation of small arms and light weapons and other local and international threats within the gulf.

“Therefore, maintaining Nigeria’s strategic deterrence posture and influence in the maritime environment is critical to our economic prosperity and regional stability,” he said.

“The fleet will conduct several exercises which will also include: protection of oil and gas facilities, fleet manoeuvres, communication, vessel board search and rescue among others.

“This exercise Obangeme will be conducted alongside French Navy Ship, Dixmude, in conjunction with other navies that will be participating.

“The exercise will give additional impetus to our overall operational combatant experiences to ensure that our nation’s territorial integrity is maintained in line with the Nigerian Navy constitutional mandate,” he said.

The FOC urged the public, as partners in progress, to be free to divulge credible information to the units in their localities to get rid of all forms of criminality within our space.

Ms Claire Pierangelo, the U.S. Consular General, said that a secured maritime environment is integral to other dimensions of security.

Pierangelo said that maritime threats in the Gulf of Guinea had continued to evolve and were increasingly becoming difficult to address.

“Maritime security is, in fact, the backbone of healthy commerce; it promotes economic development and it supports the sustainable management of all resources on which this entire region depends.

“The exercise Obangeme is designed to enhance collective capabilities of all participating nation’s to counter piracy, illegal fishing and other sea based illicit activities.

“The exercise expresses one of the many ways that the United States and like minded partners ally with Nigeria and the Atlantic Africa to address maritime security,” she said