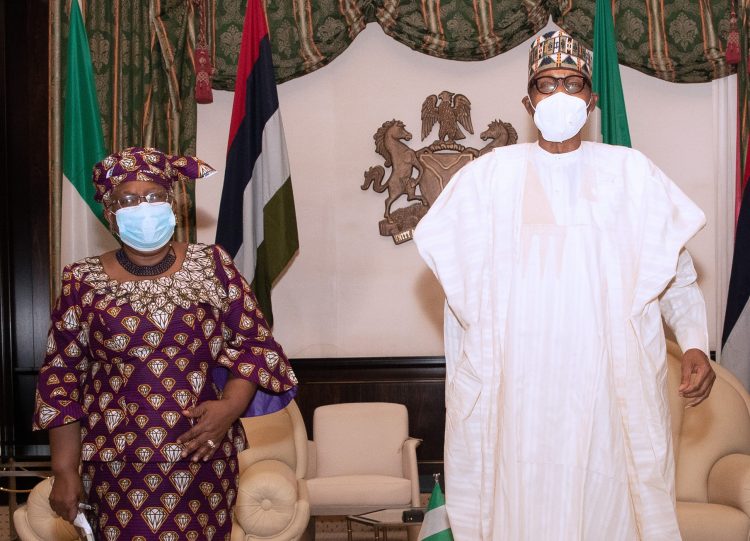 The visit of the new Director-General of the World Trade Organisation, Dr Ngozi Okonjo-Iweala, (WTO) marked the highpoint of a week of loaded engagements for President Muhamadu Buhari and Vice-President Yemi Osinbajo.

On March 15 at the Presidential Villa, Abuja, Buhari hosted Okonjo-Iweala, who has put Nigeria on the world map of achievements after clinching the WTO top post.

The president again expressed Nigeria’s appreciation to the world over Okonjo-Iweala’s selection, saying that in spite of the robust support Nigeria gave to her candidacy for the position, Okonjo-Iweala deserved the position.

“We are happy you made it but you earned it with your record of performance both at home and abroad.

“I congratulate you. Nigeria congratulates you. I know you will represent us so well,’’ said an apparently elated Buhari.

The former Nigerian finance minister, who was on a four-day official visit to Nigeria, was accompanied to the villa by the Minister of Industry, Trade and Investment, Chief Niyi Adebayo.

The Foreign Affairs Minister, Mr Geoffrey Onyeama and the Minister of State for Industry, Trade and Investment, Hajiya Maryam Katagum were also in the team.

On his part, Osinbajo had earlier on March 14, visited Owerri in Imo, where he attended a special inter-denominational thanksgiving service to mark the first anniversary of the administration of Gov. Hope Uzodinma.

On March 16, Buhari hosted out-going President Mahamadou Issoufou of the Republic of Niger at the State House.

He congratulated Issoufou for winning the prestigious 2020 Mo Ibrahim Prize for Achievement in African Leadership, describing him as a worthy African leader.

Buhari, who was awarded the highest national honour of Niger Republic, the Grand Croix Des Ordre National Du Niger by Issoufou, felicitated with the out-going leader for upholding the tenets of democracy..

Also on March 16, Buhari virtually inaugurated two road projects in Owerri, where he commended the vision and efforts of the Imo Government in providing infrastructure and improving the welfare of the people of the state.

Buhari later met behind closed doors with the Chairman of the Economic and Financial Crimes Commission (EFCC), Mr Abdulrasheed Bawa, at the State House.

Bawa, who spoke to State House correspondents at the end of the meeting, announced that from June 1, 2021 all bankers in the country must declare their assets in line with the Bank Employees Declaration of Assets Act.

“We are doing our best to ensure that this country is free of financial crimes.

”We understand that the tail end of every financial crime is for the criminal to have access to the funds that he or she has illegitimately gotten and we’re worried about the roles of financial institutions.

”We hope that all financial institutions, particularly the bankers, will declare their assets as provided for by law, in accordance with the Bank Employees Declaration of Assets Act.

”The EFCC from June 1, 2021 will be demanding for these asset declaration forms, filled by the bankers so that the line that we have drawn from the first of June is really complied with by bankers in particular,” said the EFCC chief.

Also on Tuesday, Buhari announced the appointment of Dr Mahmoud Isa-Dutse as Executive Director on the Board of Islamic Development Bank in Jedda, Saudi Arabia.

Malam Garba Shehu, the Senior Special Assistant to the President on Media and Publicity, who confirmed the development in a statement, revealed that the president also approved the appointment of Dr Oyebode Oyetunde as Executive Director for Nigeria at the African Development Bank in Abidjan, Cote D’Ivoire.

On March 17, Buhari presided over the 38th virtual meeting of the Federal Executive Council at the Council Chambers of the Presidential Villa.

The meeting approved $1.5 billion for the rehabilitation of the Port Harcourt Refinery in Rivers as well as N8.6 billion for the completion of reconstruction work on the Enugu-Onitsha highway.

Also on Wednesday, the president via a statement by his spokesman, condemned the horrific attack on a convoy returning from a weekly market in Niger Republic’s Tillaberi region in which scores of citizens were killed.

The Nigerian leader denounced the heinous attack, declaring that Nigeria would continue to stand by its neighbours in the fight against terror.

On March 18, Buhari hosted the out-going Special Representative of the UN Secretary-General and Head of the UN Office for West Africa and the Sahel, Mr Mohammed Ibn Chambas, at State House.

At the meeting, Buhari reiterated that “as far as Libya remains unstable, illegal arms and ammunition will continue to flow in the Sahel region of the African continent’’.

On March 18, the Nigerian leader presided over the virtual inauguration of the 890 million dollars grant for 2021-2023, which would also support the establishment of resilient and sustainable systems for health in the country.

At the event, the president directed the minister of health to ensure effective utilisation of the global fund’s generous provision for over the next three years.

The fund is meant to support Nigeria’s fight against HIV-AIDS, tuberculosis and malaria.

Osinbajo also on Thursday virtually opened the National Council on Privatization Retreat, where he stated that: “The only way to effectively address the massive infrastructural deficit that the country faces is by Public-Private Partnership arrangement in one form or the other.’’

Osinbajo had earlier chaired the meeting of the National Economic Council (NEC), where members of the council were informed that the COVID-19 Oxford-Astrazeneca vaccines had been delivered to every state in the country except one.

The NEC meeting rose from its monthly meeting, urging Nigerians to participate in the vaccination when it is their turn.

The meeting also welcomed the integration of the Independent Corrupt Practices and other Related Offences Commission (ICPC) to support the Presidential Task Force on vaccine accountability and transparency.

Osinbajo commended the National Primary Health Care Development Agency for smooth coordination of the nationwide distribution of the vaccines.

Also late on Thursday, the Presidency announced that Nigeria would take delivery of six of the ordered 12 Super Tucanos fighter aircraft in mid-July this year, to boost the fight against insurgency and terrorism in the country.

The president’s senior special assistant on media and publicity, made the revelation on his twitter handle on Thursday in Abuja.

He stated that the remaining six would be arriving in the country shortly after the arrival of the first set.

The presidential aide disclosed further that 14 Nigerian pilots were being trained at the Moody Air Force Base in Georgia, U.S. to handle the planes.

Buhari on March 19, received the National and International Working Groups of the Supporting Advancement of Gender Equity Initiative to commemorate the 2021 International Women’s Day.

He expressed the commitment of his administration to seeing more Nigerian women in leadership positions both at national and international institutions.

The president also assured that women’s access to credit would be further eased and that more spaces would be created for them to participate in politics.

Earlier on Thursday, the Nigerian leader congratulated Tanzania’s new President Samia Suluhu Hassan as she took over the mantle of leadership of that country, following the death of President John Magufuli.

The president’s congratulatory message to the first ever female president of the country, was released by the presidential spokesman on Friday.

Buhari urged President Hassan to unite her nation and to lead the country in a good direction.

The president expressed his desire to work with the new Tanzanian president, to advance mutual issues that were of common African and global interests.

Buhari ended the week on Friday, when he hosted the Emir of Zazzau, Alhaji Ahmed Bamalli, at the State House during which they held a closed-door meeting that lasted less than an hour.

The emir’s visit to the Presidential Villa was his first, since his installation as Emir of Zazzau by Gov. Nasiru El-Rufa’i of Kaduna State on Nov. 9, 2020.

Bamalli, who succeeded Alhaji Shehu Idris, who died on Sept. 20, 2020, after reigning for 45 years, is generally believed to be the first emir from the Mallawa Ruling House in about 100 years.