First in Africa: Buhari 3-level interchange springing up in Kano 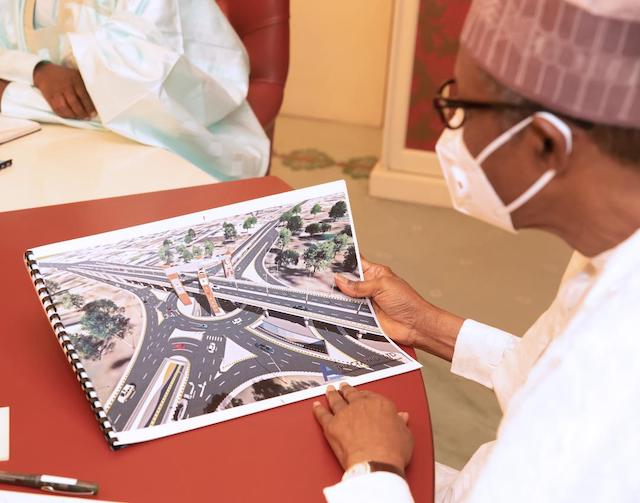 Buhari looks at the interchange design to be named after him

Gov. Abdullahi Ganduje of Kano said his government has earmarked N9 billion for the building of a three-level interchange road to be named after President Muhammadu Buhari.

The interchange, which comprises, a flyover, a bridge and an underpass, will cost N9billion.

Ganduje touted it as the first in Africa.

Ganduje disclosed this when he addressed State House correspondents after he presented the proto-type of the road project to Buhari during a closed door meeting at the Presidential Villa, Abuja, on Monday.

He expressed optimism that the road project, which he described as the only one of its kind in Africa, would ease traffic congestion in Kano metropolis.

He said: “I commissioned a group of engineers who visited all the world capitals, the most important one, and came up with a design.

“So this design is one of the world’s most interesting designs, interchange design in Kano State now, when completed.

“So, it’s not an issue of Nigeria or issue of Africa, I beat my chest to tell you that it’s a blend of interchanges from different parts of the world, in order to ease traffic.

“We revised the master plan of Kano state and all those areas where we have holdups we either build underpass or we build a bridge, and now we have resorted to putting the three together in one place; that is flyover, bridge and underpass, all at one point so that there’ll not be any traffic jam.

On security, the governor described Kano state as the most peaceful state in the federation.

According to him, the state government has put in place various security measures to ensure peace and harmonious environment for the general progress of the state and the nation in general.

“All what I know as of today Kano is the most peaceful state in the federation and this is not by chance, there must be some security measures that we have taken, like full cooperation among the security agencies in Kano state.

“We introduced the Command and Control Centre; the CCTV where we are viewing the whole Metropolitan Kano, we have the most powerful tracker vehicle, equipment in Kano.

“Falgore Forest where bandits usually inhabit, we said no, not in Kano State. We established a military training ground in Falgore Forest and therefore bandits cannot inhabit it.

“Our border with Kaduna, we have a forest and where we are establishing Ruga programme, we discussed with nomadic Fulani, they agreed to be settled there.

“In fact, other Fulani are even coming,’’ he added.

He said that the state government in conjunction with Islamic Bank had concluded arrangements to build dams, artificial insemination centre, veterinary clinic, school for the children of the herders so as to make the Ruga settlement much more comfortable for the inhabitants.

“We also established a security training institute where we are training our young men and women for community policing.

“Even yesterday, I graduated 200, while 500 are under training there, with the advice of the security agencies in Kano.

“So all these efforts are in order to keep Kano in the peace, apart from other policies in education, free and compulsory education, reforming the Almajiri system, what we have done to the health sector, and so many other things. But this one is left for the people to say.”

On the recent attempted attack on Gov. Samuel Ortom of Benue and other cases of insecurity in the country, Ganduje said:

“I think it’s unfortunate. But I believe with the appointment of new service chiefs, new strategy will be developed. I think Mr President has always been serious on this issue, but is rather unfortunate.

“Not only governors being attacked, anybody who is attacked in Nigeria, one should be worried because life is life.

“Certainly we’re worried because a governor is supposed to have some security with him, let alone of an ordinary man who has no security. So you can see how serious the situation is.

“It’s unfortunate, but we believe we will come over it,’’ he said.