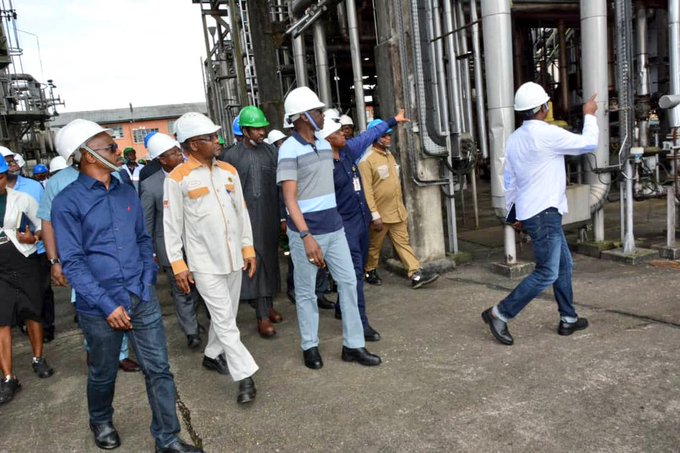 Abracadabra is now commonly used as an incantation in the performance of magic. Literally it is used as the more you look, the less you know or see. Abracadabra is the best word to describe what is going on in Port Harcourt Refinery.

The Refinery is situated at Alesa Eleme, which is 19kilometres from Port Harcourt city. I have visited the refinery thrice. Twice I accompanied my two bosses, Alhaji Gidado Idris, GCON and Chief Ufot Ekaette, CFR, both late Secretaries to the Government of the Federation. My last visit to the refinery was three years ago with a friend, who once worked in the refinery. One needs to see the refinery.

The scandal in Port Harcourt Refinery is so deep that it can’t be uncovered by the most competent spy master in the world.

The Port Harcourt Refining Company,(abbreviated PHRC), is a Nigeria-based oil and gas company primarily specialising in the refining of crude oil into petroleum products. The company is a subsidiary of the Nigerian National Petroleum Corporation (NNPC).

The latest news about Port Harcourt Refinery is that the Central Government has approved 1.5 billion dollars for the rehabilitation of the refinery. The Minister of State for Petroleum, Timipre Sylva, who briefed reporters after the FEC meeting said the rehabilitation will be done in three phases of 18, 24 and 44 months. He said the contract was awarded to an Italian company, Tecnimont SPA, who, according to the minister, are experts in refinery maintenance.

Mr Sylva said the funding of the repairs will be from many components including the Nigerian National Petroleum Corporation (NNPC), Internally Generated Revenue (IGR), budgetary provisions and Afreximbank. “The Ministry of Petroleum Resources presented a memo on the rehabilitation of Port Harcourt refinery for the sum of 1.5 billion, and that memo was $1.5 billion and it was approved by council today.

To many, it is not good news. They call it capital flight. Only Italy will benefit while Nigeria becomes poorer.

The approval therefore confirms a January 7 report by Reuters this year that Nigeria’s state oil firm NNPC is in talks to raise around $1 billion in a prepayment with trading firms to refurbish its largest refining complex at Port Harcourt. According to the report, the money would be repaid over seven years through deliveries of Nigerian crude and products from the refinery once the refurbishment is complete, the sources said. Cairo-based Afreximbank is leading the financing. “Afreximbank is looking into a facility for the refurbishment of the Port Harcourt Refinery. However, the borrower is yet to be determined,” a spokesman for the bank said.

On July 27, 2017, the former Minister of State for Petroleum, Dr Emmanuel Ibe Kachikwu promised to end fuel importation by 2019, or he would resign from his position. He never resigned and fuel importation did not stop until he was dropped by President Muhammadu Buhari in his second term.

Nigeria has spent over $1.6 billion on the Turn-Around Maintenance of the country’s four refineries, without any sign of improvement since 2000. Nigeria is the fifth largest exporter of crude oil in the world, but spends over $16 million per day importing refined petroleum products. This situation has been attributed to the poor refining capacity of the country. The total utilisation capacity of the refineries was estimated at below 40% of the total installed refining capacity, making them the worst performing refineries in Africa. Dr Ibe Kachikwu confirmed the poor conditions of the plants during an oil and gas stakeholders’ meeting in Abuja on Tuesday, July 18, 2017. “Our refineries have not been maintained at the same levels that other nearby countries have continued to do theirs. Look at Ghana and Ivory Coast, the same refineries, about the same ages and working at over 90 per cent capacity,” he said.

On November 22, 2019, the House of Representatives ordered an investigation into the financial allocations set aside for ‘Turn-Around Maintenance’ of the petroleum refineries in Port Harcourt, Warri and Kaduna, estimated to have cost $396.33 million in four years. The inquiry was initiated following the motion titled “Call for investigation of the $396.33 million allegedly spent in four years on turn around maintenance of the nation’s three refineries.”At the plenary session, Ifeanyi Momah, representing Ihiala federal constituency of Anambra State called for the inquiry, alleging that the amount spent on maintenance of the facilities had not yielded the desired results.

The House also called on the Federal Government to consider “divesting a certain percentage of its shareholding in the Port Harcourt, Warri and Kaduna refineries to competent investors under a transparent and fair bidding process.”

Also, the House mandated the Committee on Petroleum Resources (Downstream) to conduct an investigative hearing into the maintenance expenses made from 2015 to date while the committee was to submit its findings within eight weeks.

Till today, the report of the so called investigation by the House of Representatives has not surfaced.

Let us take a brief look on the three refineries that we have. The first, Port Harcourt Refinery was built in 1965 under the then Prime Minister, Alhaji Abubakar Tafawa Balewa (1912-1966), GCFR. It was commissioned, operated and managed by SHELL BP. The capacity was 35,000 barrel per day. However, ownership passed to the Central Government in 1970 under General Yakubu Gowon (85), GCFR. The Refinery was upgraded in 1971 to 60,000 barrel per day.

The second Port Harcourt Refinery, a deep conversion facility, with an installed capacity of 150,000 barrel per day was built and commissioned on November 25, 1989 under General Ibrahim Babangida (79), GCFR, bringing the combined capacity of the refinery to 210,000 barrel per day. The refinery in 2000 under President Olusegun Obasanjo (84), GCFR, operated at about 47% of the total installed capacity. The turn Around Maintenance (TAM), was last carried out in 1994 under General Sani Abacha (20 September, 1943- 8 June, 1998), GCFR. The old refinery was shut down because internally generated power is not enough to run the two refineries and public power was unreliable.

Warri Refinery was commissioned in 1979 under General Olusegun Obasanjo with an initial capacity of 100, 000 barrel per day. It was de-bottle-necked to a capacity of 125,000 barrel per day in 1988. It was further expanded in 1988 with the addition of a petrochemical plant with a capacity to produce 35,000 metric tonnes and 18,000 metric tonnes per annum of polypropylene and carbon black respectively. The last TAM was carried out in 1994. The Refinery operated from January to February 2000 at about 10.3% of the installed capacity and was shut down because the main heater blew up. In 2000, four capital projects were identified for optimizing the performance of the refinery at a total cost of $220.7 million dollars and N351.15 million.

The Kaduna Refinery was commissioned in 1980 by President Shehu Usman Aliyu Shagari (25 February 1925-28 December, 2018) with an initial capacity of 100,000 barrel per day. In 1985, under Major General Muhammadu Buhari (rtd.), GCFR, it was de-bottle-necked to 110,000 barrel per day. The refinery was integrated with a petrochemical plant in 1988 with a capacity for the production of 30,000 metric tonnes of linear alkyl benzene. It was shut down in August 2000 partly to allow rehabilitation of the heaters and because the TAM which started in 1998 was yet to be completed. The last TAM carried out before then was in 1992 which means that two consecutive TAM (1994 and 1996) were not carried out. Eighteen capital projects were identified for optimizing the performance of the refinery at a total cost two billion naira.

With the Dangote Refinery and its monopolistic policy patronized, endorsed, encouraged and approved by the central government, whatever money to be spent on Port Harcourt Refinery will go down the drain again.

The refineries are limited liability companies, which should be able to do their production planning, funds projection and procurement. They should also have audited Profit and Loss Account and Balance Sheet. The refineries though limited liability companies, are not run like enterprises, which should pay their way. They have no Board of Directors and are tied to the apron string of the NNPC in a system of inter-locking directorates. They operate by presenting annual budgets and performance targets plans to the NNPC, which examines the budget and makes resources available on the basis of request and availability and not necessarily requirement. Furthermore, the financial operations of the refineries, whereby they are regarded as contract processors, to whom fixed processing fees are paid by the NNPC, who in turn supplies the crude oil and consigns all the petroleum products to PPMC for sale and distribution, does not allow for proper appreciation of the cost structure and profitability of refining operations.

The major processes used by the refinery to produce petroleum products from crude oil are crude distillation, vacuum distillation, Naptha Hydro-Treating, Catalytic Cracking and Gas Concentration. The salable products obtainable from the refinery are liquefied petroleum gas or cooking gas, premium motor spirit or petrol, dual purpose kerosene (aviation/household), automotive gas oil or diesel and fuel oil. The refinery was also said to produce some special products namely—unstenched LPG for insecticide manufacture, straight run naphtha and propylene rich LPG, feed to to Eleme Petrochemical Plant. Product availiability at PHRC was said to be satisfactory in spite of the ongoing Turn Around Maintenance (TAM) which was commenced in May, 2000.

Port Harcourt Refinery was said to generate its own steam and electrical power. During normal operations, three boilers and three turbo-generators were used to supply the required energy. Evacuation facilities available included 120 storage tanks of various sizes for crude oil, intermediate and finished products; 2 modern jetties at Okrika each of which had two berths- an outer berth capable of handling up to 35,000.00 DWT vessels, and inner berth for ships of up to 5,000 DWT; A 55km pipeline constructed from NNPC/Shell Bonny Terminal to supply crude to the refinery and road tankers and pipelines. The refinery has modern treatment plants to handle all waste from its operations.

The constraints of the refinery were poor performance of the two other refineries in the country; inadequate products evacuation facilities.

By next year the 12 billion dollars oil refinery of the Dangote refinery being built on 6180 acres of land between the Atlantic Ocean and the Lekki Lagoon will take off and will process 650,000 barrels of crude oil daily.

With the Dangote Refinery and its monopolistic policy patronized, endorsed, encouraged and approved by the central government, whatever money to be spent on Port Harcourt Refinery will go down the drain again.