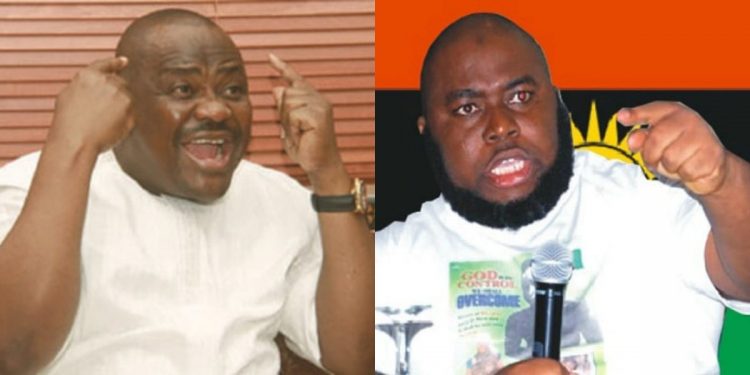 Governor Nyesom Wike and Asari Dokubo: Wike says secessionist agitations by Dokubo and others will not be allowed in Rivers

Governor Nyesom Wike has warned that secessionist agitators like ex-militant leader,  Asari Dokubo and the Indigenous People of Biafra, IPOB will not be allowed to operate in Rivers State.

He added that Rivers State would not be part of any move to secede from the country.

Rivers State based agitator, Dokubo had recently formed what he described as ‘Biafra de facto Customary Government‘ in which he declared himself as the President.

He also included most parts of South South and South East of the territory to his new ‘country.’

But Wike said that he would never allow any secessionist group like the one led by Dokubo to use Rivers as the base for their separatist activities.

He asked the agitators to go elsewhere for their agitations.

“All those who are talking about their independence, they can go anywhere, but not from here. We are not part of any secession.

“We will support the Army and other security agencies to make sure they reduce the level of crime and criminality in this State.”

In his response, Lt. General Attahiru commended Wike on his zero tolerance for separatist groups.

The Chief of Army Staff said he was in the State on assessment of 6 Division of the Nigerian Army.

“I also thank you for your continued non-tolerance approach against separatist groups and also your contribution in promoting peaceful co-existence among the various communities that live in Rivers State.”

Attahiru has also recently warned that the Army would soon move against the secessionist agitators.