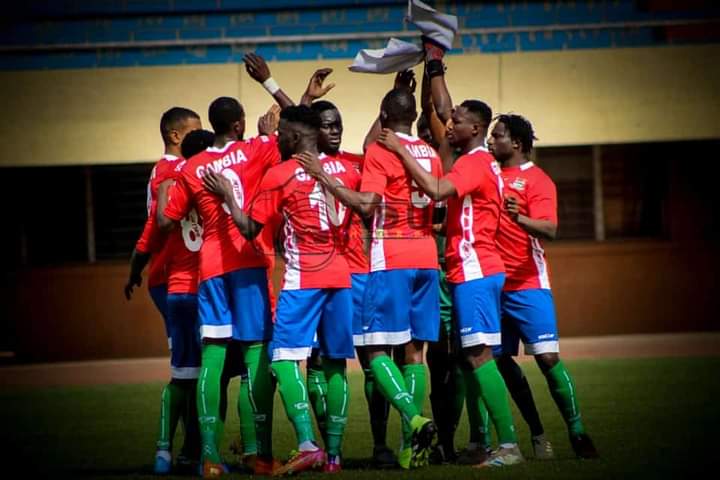 Jubilant Gambia team after their qualification for AFCON Cameroon 2021

Gambia’s Scorpions and Comoros have qualified for the Africa Cup of Nations, AFCON Cameroon 2021 for the first time ever.

Gambia made it after a slim 1-0 victory over Angola in Banjul on Thursday. The victory sees Gambia move to 10 points with one round of matches left.

Assan Ceesay scored the lone goal for the Gambians in the 62nd minute to give the Gambians the vital victory.

The feat was another feather to their footballing caps after the recent performance of their Under-20 team in Mauritania.

The qualification sparked celebration in Banjul, with the excitement catching the Embassy of the United States.

“Historic moment – The United States congratulates The Gambia National Team, The Scorpions, for their victory against Angola today, and for the country’s maiden qualifications to the African Cup of Nations. Congratulations to The Gambia”.

Comoros qualification came after they picked up a point in a 0-0 draw with Togo at home on Thursday.

The final whistle drew wild celebrations in the stadium, with the players and coaches hugging, jumping and dancing.

The result in Moroni sees Comoros move to nine points ahead of their final match against Egypt and this means the worst they can finish is second spot.

Egypt won the remaining qualification slot after picking a point against Kenya in the other group match in Nairobi.

Gabon have also booked a ticket to Cameroon after a well worked 3-0 victory over DR Congo at the Stade de la Renovation de Franceville.

Ghana’s Black Stars have also secured their ticket to next year’s Africa Cup of Nations (AFCON) tagged “Cameroon 2021” after holding their hosts South Africa to a 1-1 draw in Johannesburg on Thursday.

Ghana raised their tally to 10 points, same as South Africa but led the Bafana Bafana on head-to-head rule.

Sudan are third with nine points while Sao Tome and Principe are out of the race with no point earned.

With Sudan hosting South Africa in the last match day, Ghana are assured of one of the top Group C spots, as they also lead Sudan on head-to-head rule.

South Africa were the better side in the first half, with chances falling to Percy Tau and Themba Zwane, while Kwame Opoku and Emmanuel Boateng led the visitors’ attack.

Four minutes after the restart, Ghana took the lead through Mohammed Kudus who concluded a nice collective work.

Kudus who plays for Norwegian club FC Nordjaelland found his way through three defenders before delivering into the net.

South Africa created more chances to find a late winner but without managing to score, as four-time African champions Ghana booked their place in Cameroon.