Results of Brexit trickling in for Britain: They are catastrophic 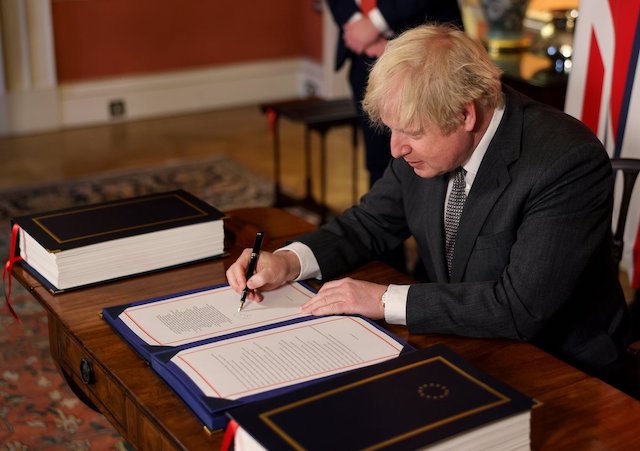 Results of Brexit catastrophic. Above PM Boris Johnson signs the trade deal with EU on 30 December

Today, we’re witnessing something remarkable in the world. A nation simply wilfully self-destructing. Economically, which leads to socially and culturally. What do you call when a nation commits suicide? Brexit.

Let me give you some incredibly, painfully, astonishingly grim statistics. In the first month of Brexit — that’s when Britain left the EU formally — its trade with Europe fell by half. That might not sound like a lot, so imagine that you were a patient, and I was a doctor. And I told you that your pulse ox had fallen by half. Or that your platelet count had suddenly halved. Or that maybe you only suddenly had half a brain. You’d be in serious trouble.

That is where Britain is now. Nobody has seen anything like this happen to a developed country in modern history. You have to go back, perhaps, to Weimar Germany and before to see anything remotely similar. And certainly nobody has been painfully, tragically stupid enough to choose it.

When trade suddenly halves — which is like half the blood in you suddenly going missing — it’s what’s called in economics a “sudden stop.” That’s as dire as it sounds. Where do we see “sudden stops” happen, and why? They are things that tend to happen in less developed countries. One famous example is South and Latin America. Argentina, for example, suffered sudden stops, or thereabouts, as the result of a currency crisis. Why did those currency crises ensue? Because the world lost faith and confidence in those countries’ ability to repay their debts.

Think about that for a second. Britain has wilfully made itself the economic equivalent of a banana republic. Not metaphorically, but literally.

I don’t like using the word “banana republic.” It misses one major point of history, which is that poorer nations had poor governance inflicted on them, by, among other things, America’s global war for fascist capitalism, which left South and Central America in tatters. Britain isn’t South or Central America. Nobody invaded it or bombed it. It chose this insane destiny of ruin. For what? I’ll come to that. First let me continue.

Where else do we see “sudden stops” — the economy suddenly grinding to a screeching halt? When sanctions are imposed. Sanctions are a terrible, stupid thing. Some dumb uneducated hick Senator in America wants to punish those “Eye-raqis” so he decides to clamp down on…Iran. Who suffers? Not the elites. They don’t care. They have their BMWs and Italian furniture all the same, whether smuggled in, or just bought at a corrupt discount. The average person is who begins to suffer. Shortages of basics. Food, water, medicine. Jobs, money, income. Choices. Human possibility.

Britain is the only country in the world, possibly in history, dumb enough to impose sanctions on itself. That is what Brexit economically amounts to. Trade with Europe falling by half means, in practical terms, that the British economy is shrinking as if it’s had a heart attack. Europe is obviously Britain’s largest trading partner. And now Brits are simply going without goods and services in huge quantities — things they’re accustomed to buying from Europe, being on the shelves, being able to obtain without thinking about it. Brexit is Britain being horrifically stupid enough to sanction itself, and just like any case of sanctions, it’s the average person who’s going to be hit hardest.

What does that mean? It means that British businesses are struggling en masse, small and medium sized ones. Just as Britain was Europe’s largest trading partner, so too Europe bought plenty of stuff from Britain — it was its biggest export market. Many small and medium sized British businesses are taking desperate measures to supply their customers in Europe — on their own dime — like flying in goods on special flights.

Why is that? Because Boris Johnson struck a horrifically bad “trade deal” at the last second. He didn’t keep Britain in the EU’s single market. Instead, Britain is now treated like any other country outside it, and that means that British businesses have to fill in massive numbers of forms to export stuff where there used to be no border a few weeks ago.

And the same is true of European ones. Customers, meanwhile, suddenly have to pay all kinds of new charges, from taxes to duties to “handling fees,” which jack up the prices of basic stuff, often to the point of making customers simply walk away.

What happens as this slow-motion train wreck gathers momentum? Those British businesses taking extreme measures to supply European customers can’t keep it up forever. The truth is that many of them are simply unprofitable now, because the transaction costs of trading with Europe have suddenly increased massively. They will go bankrupt — after they deplete their savings, in a desperate and doomed bid to stay afloat.

What happens when a tsunami of bankruptcies hits an economy? Three things. One, unemployment spikes. Two, short term unemployment becomes long term unemployment. Three, people can’t pay their debts. Bang! That’s the recipe for something beyond even a depression. We don’t really have a good word for it in economics, because, of course, nobody’s usually stupid enough to commit suicide as a country for no good reason.

That might all sound like anodyne economics to you, but let me assure you, it’s not. It has serious social and cultural consequences — fatal ones. Brexiters are fond of trotting out the amazingly foolish line: “It’s about sovereignty, not economics!” which only really reveals their ignorance. Maybe they can live on thin air, maybe money grows on trees for them — but for a society, growing poorer, suddenly, rapidly, is the kiss of death.

How so? Well, ask yourself what happens as unemployment rolls through an economy like Britain’s in a massive tidal wave, as scores of businesses shutter their doors for good, now that trade with their largest export market is simply uneconomical.

People are poorer. That means that a society’s tax base has shrunk. That means there is less — far less — to fund public goods and services with. And that is why we don’t want to grow poor as societies — not because riches accrue to the wealthy, but because we cannot afford to be modern societies if we grow poor. A shrunken tax base can’t support the expansive level of public goods which makes a modern society — things like public healthcare, education, retirement, housing, income, medicine. So all those basics begin to erode. You end up like America, in the end, where all those basics become privileges that a few enjoy — not human rights for all.

What does that erosion of basics as fundamental human rights do — healthcare, retirement, income, education, medicine, and so on? Now life gets Americanized. People have to get up, every day, and compete against one another, in a bitter, brutal battle, whose stakes are life death — simply to survive. They have to go out and earn a tiny morsel of “money” to buy food and water with, to pay “utility bills,” to have “healthcare” and medicine. Everything is now privatised and run for profit, because a society can’t afford public goods — and privately run, costs of the baics, from healthcare to education, skyrocket, just as they’ve done in America.

What does that skyrocketing of prices result in? A vicious cycle of poverty accelerating. Lower incomes, a shrunken tax base, fewer public goods, more privatisation, more profit…lower incomes. This is the path of perma-austerity that caused America to collapse. And shame on the British left, which backed “Lexit” ardently, for being so awfully clueless, so abjectly ignorant, that it didn’t even understand that “Brexit” was just a synonym for “perma-austerity,” not “communist utopia.” It’s so painfully stupid that words fail to describe this bizarre and shocking mistake of the British left.

But that’s not all. What happens as the vicious cycle of accelerating poverty sets in? Here is where we cross the line from economics into society and culture. Social bonds disintegrate. Communities rupture. Ties between people sunder. And that is when society really begins to come undone. Instead of being able to regard your neighbour as your friend, equal, ally, partner — you must now regard them as an adversary, rival, enemy, in a brutal daily contest for basic resources. It’s you or them. One of you is going to go without. Who will be the victor today? Amplify that across millions of people — and you begin to see how old racial and ethnic hatreds explode, all over again.

That is the vicious cycle that John Maynard Keynes — the greatest British economist, ironically — became famous for pointing out. It is how we understood World War II. Nationalism becomes fascism as this process set in. Poverty accelerates, by way of a shrinking economy yielding underinvestment, perma-austerity. Life grows harder and bleaker every year. The value of community, togetherness, friendship, kindness, gentleness, fade — they are a luxury nobody can afford, when life is like it is in America, a bitter battle that only the cruel, ruthless, and selfish survive.

And as people adopt the poisonous values and attitudes of aggression, hostility, rage, brutality, as all this gets normalised — they become easier and easier prey for demagogues. Who scapegoat hated others as the causes of the woes of the true-blooded. In Britain, that process is already well underway — Europeans were the scapegoat without, for the stupidity of austerity, and now women, activists, Black Lives Matter protesters, the “woke,” students…anyone who disagrees with the cause of the nationalist crusade…is an enemy within, who can be jailed for up to ten years.

And that is how a society kills itself. It’s easy to see that there won’t be a UK anymore — Scotland will leave at the first opportunity, Brexit will cause generations of pain, all over again, in Ireland. And Britain? Britain is now a shattered country. Its economy is now experiencing the shock of sudden, massive poverty, which is already leading, as it always does, to social bonds breaking down, fascism and hate and stupidity rising, their violence and cruelty replacing values of decency and goodness. The vicious cycle of economic shock leading to social implosion and cultural degeneration has set in in Britain. The very one which left so much of the world in ruins for so long, the one which Weimar Germany exemplified. And it’s probably unstoppable now, for a very long time to come.
The price of Brexit is going to be decades upon decades of implosion now. A long, slow torturous death, one slash of the knife at a time. If I believed in karma, maybe I’d say it was the price of empire.

Britain used to be, just two short decades ago — less than that — one of the world’s most successful societies. Happy, healthy, wealthy, wise. And now? Let it be a lesson to a baffled, astonished world. How does a country — even one so rich and powerful as Britain — commit suicide? Can such a thing even be done?

*Umair Haque is the director of the Havas Media Lab and author of the book The New Capitalist Manifesto: Building a Disruptively Better Business. He first published this article in Medium