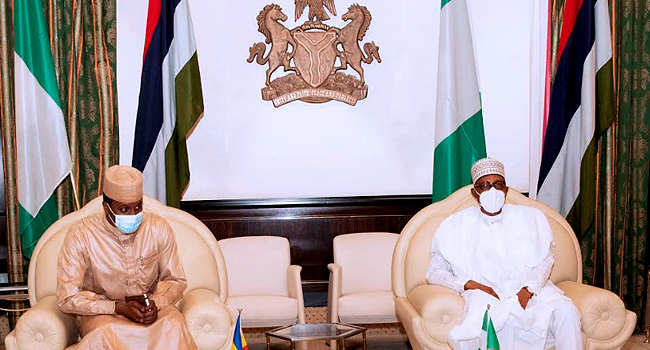 The Chadian leader, who arrived at the Presidential Villa at about 12.15 p.m., was welcomed by Buhari at the forecourt of the villa.

The two leaders would deliberate on sub-regional issues including security challenges occasioned by the activities of Boko Haram.

Buhari and the Chadian leader last met face-to-face in June 2019 on the sidelines of the Organisation of Islamic Conference summit in Makkah, Saudi Arabia.

Buhari last visited N’Djamena, the Chadian capital, in April 2019 where he participated in a one-day Extraordinary Session of the Conference of Heads of State and Government of the Community of Sahel-Saharan States.

The Chadian leader, who is standing for re-election for a sixth term, may brief the Nigerian leader on the forthcoming Chad’s presidential election on April 11, 2021.

Deby, who has ruled Chad for 30 years, began his campaign for a sixth term on March 13, calling for unity after rival protests were banned.

The Chadian leader is expected to brief the media at the end of his one-day official visit to Nigeria.

The Minister of Foreign Affairs, Mr Geoffrey Onyeama, and the Director-General, National Intelligence Agency (NIA), Ahmed Rufa’i, are among those in the forecourt to welcome Deby.