I didn't mean FG should recruit 50m into Army - Tinubu 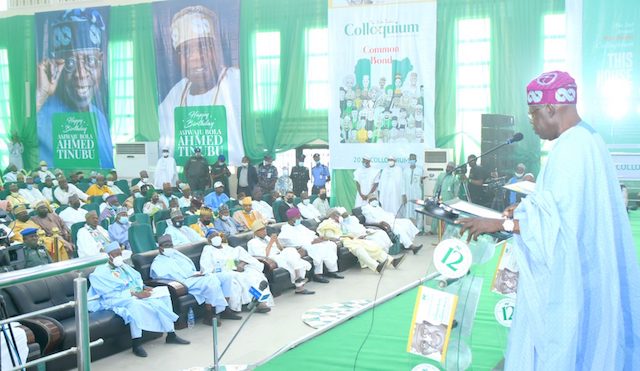 Tinubu speaks at colloquium: he says he meant 5 million youths

National leader of the All Progressives Congress, APC, Asiwaju Bola Tinubu on Tuesday said he never meant that the Federal Government should employ 50 million but 5 million youths into the Nigerian Army and other agencies to boost the fight against terrorism, banditry and others.

He said it was a slip of the tongue.

Tinubu was caught in a video that has gone viral, saying that the Federal Government to employ 50 million youths into the Nigerian Army to boost fight against terrorism, banditry and and all forms of internal and external security threats confronting the nation.

He spoke on Monday during the 12th Bola Tinubu Colloquium to celebrate his 69th birthday.

“We are under-policed and we are competing with armed robbers and bandits to recruit from the youths who are unemployed —33 per cent unemployed?

“Recruit 50 million youths into the army,” he stated, adding that “what they will eat —cassava, corn, yam, will grow here.”

However, Tinubu, who spoke through his media aide, Tunde Rahman on Tuesday told P.M. NEWS that he meant the government should employ five million youths and not 50 million into the army.

Rahman issued a clarification on what he meant:

Asiwaju Tinubu canvassed the urgent need to combine employment and national security policy by the recruitment of 5 million youths in all aspects of nation-building, ranging from infrastructural development to agricultural modernization.

He believes that the more job opportunities are presented to our youth the less some of them will be tempted into illegal and dangerous activities.

As part of this overall approach, he believes that eligible youth should be recruited into the armed forces, police and other security agencies to augment the functional capacity of our security apparatus thus ensuring the better security and safety of our people.

Asiwaju seeks the expansion of security personnel by 50,000 for the armed forces not the 50 million that was mentioned in error. It was an accidental verbal mistake of which we all commit from time to time especially when reciting a series of large numerical figures.

He did not mean 50 million youths, which is almost a quarter of our total population.

The crucial matter is that Asiwaju rightly observed that such strong recruitment would serve the twin-purpose of helping to tackle unemployment while at the same time enhancing the security of every Nigerian.

Please forgive any confusion due to this innocent error. The most vital thing is that he set forth a wise and timely approach that would help us face two of today’s stiffest challenges.

It is in the spirit that we hope you view and assess his proposal for it seeks to provide a way for more youths to participate in building a greater, safer and more prosperous country.

Meanwhile, Twitter commenters are feasting on the erroneous statement.

Senator Shehu Sani, in a tweet, said the nation had not been able to adequately cater for 150,000 soldiers.

He wondered how Tinubu wanted the government to cater for 50 million soldiers on the payroll.

“If we have not been able to adequately cater for our 150k soldiers, how do we handle and cater for 50 million armed soldiers on our payroll?” he asked.

Tinubu had justified his statement by saying the government should not be constrained by austere measures in spending on its people.

He said Nigeria as a sovereign state can create money, as being done in the US and other developed countries.

He cited the USA which is spending $1.9 trillion to boost its economy and has also lined up another $3trillion for infrastructure.