View from USA: How Nigeria can end Boko Haram war without fighting 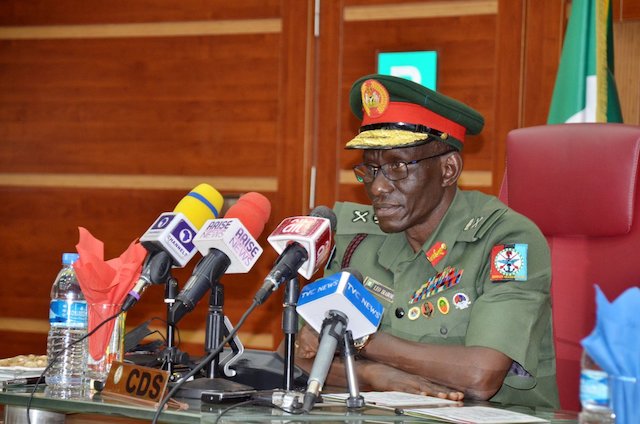 By Arlene J. Schar and Dr. David Leffler of the Centre for Advanced Military Science in Fairfield, Iowa, USA sent this advisory to Nigeria’s military authorities on how the 12 year-old Boko Haram war and the nascent banditry in the northwest can be ended without violence

Nigerian Chief of Army Staff (COAS), Lt. General Ibrahim Attahiru, stated his vision to rebuild the Nigerian Army into a formidable force to defeat all adversaries.

He made this assertion at the opening ceremony of the combined COAS First Quarter Conference and Nigerian Army Operations Retreat 2021 held at Army Headquarters Command Officers Mess 1, Abuja.

Lt. General Attahiru faces a challenging task: uniting a fractured and crippled country in the midst of a raging pandemic with economic devastation and societal discord fuelling terrorism and conflict. Achieving unity under these stressful conditions is a daunting task but it can and must be done.

Can conventional tactics and strategies truly defeat all adversaries during these challenging times of pandemic, protest, and economic collapse? Nigerian’s ideal defense against terrorism and conflict is a proven, state-of-the-art, non-violent alternative that actually prevents adversaries from arising in first place. This alternative gives warriors a strategic and profound proactive advantage by preventing conflict, war and terrorism before they occur, for far less the cost of conventional defenses. This highly effective unconventional approach with a proven scientific record for diffusing conflict and violence is called Invincible Defense Technology (IDT), a brain-based technology which incorporates practices of the non-religious Transcendental Meditation® (TM®) to bring about peace.

When large groups of trained practitioners apply the advanced TM techniques together twice a day, a powerful field effect of coherence and peace affects the consciousness of the surrounding population. The bigger the group the bigger the effect. These outcomes of consistent and measurable decreases in war deaths, terrorism, and crime have been substantiated by extensive research published in the following refereed journals: Alcoholism Treatment Quarterly, International Journal of Neuroscience, Journal of Conflict Resolution, Journal of Crime and Justice, Journal of Mind and Behaviour, Journal of Offender Rehabilitation, Journal of Social Behaviour and Personality, Psychological Reports, Psychology Crime and Law, Social Indicators Research, Social Science Perspectives Journal, Society of Neuroscience Abstracts, and Studies in Asian Social Science. Hundreds of scientific studies conducted at more than 200 independent universities and research institutions and published in peer-reviewed scientific and medical journals confirm that regular practice of TM produces major increases in calmness, happiness, creativity, energy, and clarity of mind. Over six million people worldwide of all religions, cultures and ages have learned TM and experienced these benefits.

The TM field effect was demonstrated in 1993, when over 4000 TM experts gathered in Washington, DC as a “National Demonstration Project to Reduce Violent Crime and Improve Governmental Effectiveness in Washington.” As predicted, research published in Social Indicators Research showed that crime dropped 24% and public approval of the US president suddenly changed from a negative trend to a positive trend.

Research indicates that such calming effects can also be created on a national level. A recent study published in Studies in Asian Social Science showed that large group practice of these programs in Cambodia between 1993 and 2008 was associated with a 96.2% decline in sociopolitical violence in that war-torn country compared to violence in the preceding three years. The authors conclude the likelihood this reversal in the rising 1990–1992 trend of violence occurred randomly was one chance in 10 million. Other published research has shown that after advanced TM was applied, Cambodia’s gross domestic product (GDP) growth rates averaged 8.9%, and poverty was reduced by 63% between 1994 and 2008. By 2010 Cambodia was ranked 63rd out of 152 countries on the international scale of poverty, an unprecedented jump of 89 places in less than one generation.

Despite such promising scientific results, this TM research and the actual military field tests in other countries have so far been largely ignored by Nigeria’s policy makers. Image what Nigeria’s leaders could accomplish together if permanent groups of TM experts were established to meditate twice daily to reduce the high stress levels in their country.

Lasting peace and invincibility could be established in Nigeria if it is based on science rather than politics. In order to best succeed it would be wise to advocate this simple and cost-effective approach. Lt. General Ibrahim Attahiru’s warriors could quickly form what is called a Prevention Wing of the military as militaries in other countries are doing. Any large group of experts trained in the advanced TM techniques can produce similar results. Groups could be comprised of congregations at places of worship, prisoners, the elderly in retirement homes, even students as was done in Cambodia. The important factor is that the techniques be performed by trained TM experts consistently in groups twice a day. Simply by doing this high societal tensions would be eradicated.

Violence has historically been the response to national differences, despite its costs both in financial and human terms. What Nigeria’s divided country needs now is for all leaders to recognize that there is a more effective proven way to resolve differences. TM is that scientifically-verified approach, and now is the time for Nigeria’s leaders to utilize this new brain-based technology to dissolve high political tensions and create lasting stability and unity.

Arlene J. Schar has served as Dr. Leffler’s Executive Assistant at the Center for Advanced Military Science (CAMS) http://www.StrongMilitary.org since 2015. She has edited and co-authored many of Dr. Leffler’s articles.

Dr. David Leffler served as an Associate of the Proteus Management Group at the Center for Strategic Leadership, US Army War College. Currently, he serves as the Executive Director at CAMS.