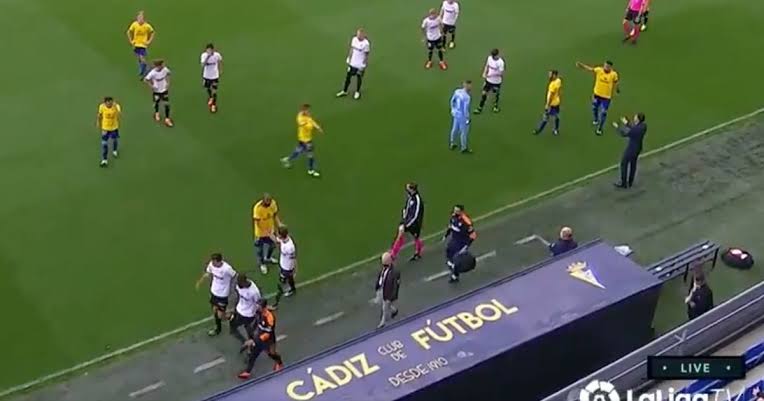 Valencia’s players walked off the pitch during their La Liga game against Cadiz on Sunday, after the club said their player Mouctar Diakhaby was racially abused.

After a short delay, the Valencia team returned to resume the match, this time without Diakhaby, who the club said had requested his team-mates continue.

Diakhaby had shared a heated exchange with Cadiz’s Juan Cala at the Ramon de Carranza stadium before indicating to the referee he was leaving the field, with the Frenchman’s team-mates then following him off in the 37th minute.

Valencia posted messages on social media soon after, which read: “The team have held a meeting and decided to continue the game, in order to fight for the honour of the club, but denounce racism of any kind.

“We offer our complete backing to @Diakhaby_5. The player, who had received a racial insult, requested that his teammates return to the pitch. We support you Mouctar.”

Cala was then also substituted at half-time, having earlier scored the opening goal for Cadiz, with Kevin Gameiro equalising for Valencia.

Diakhaby was replaced by Hugo Guillamon and watched the second half sitting in the stands.