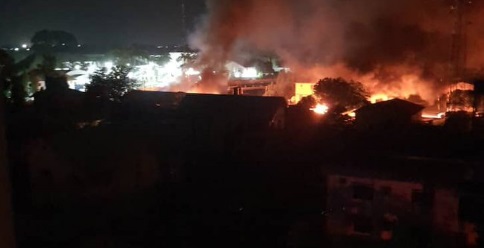 According to multiple reports, the attackers struck the prison and police department shortly after midnight, freeing an unconfirmed number of inmates and suspects.

According to social media accounts what started as a mere shoot-out which lasted for about three hours, later resulted in a complete breakdown of law and order with people scampering for safety.

A Twitter user, Chidi Odinkalu in a tweet said “Reports of overwhelming attack on security & law enforcement establishments in Owerri, Imo State, SE Nigeria. State CID, Prisons. Perpetrators unclear but seem to have gone unchallenged for over 75 mins with discharge of high-calibre weapons. Possible detonations too.”

Owerri prison and police investigations department were set ablaze by unknown gunmen last night according to reports. Many prisoners freed. There was a heavy gunshots around the area. pic.twitter.com/3G0DEPlVdF

Reports have it that the gunmen took advantage of the calm atmosphere of Easter to invade the centre at the wee hours of Monday.

Owerri residents and commuters who ply the Okigwe road are apprehensive as the situation is degenerating.

The development came after the state Commissioner of Police, Nasiru Mohammed promised maximum security during and after the Easter celebration while announcing the deployment of over 4760 personnel in the state.