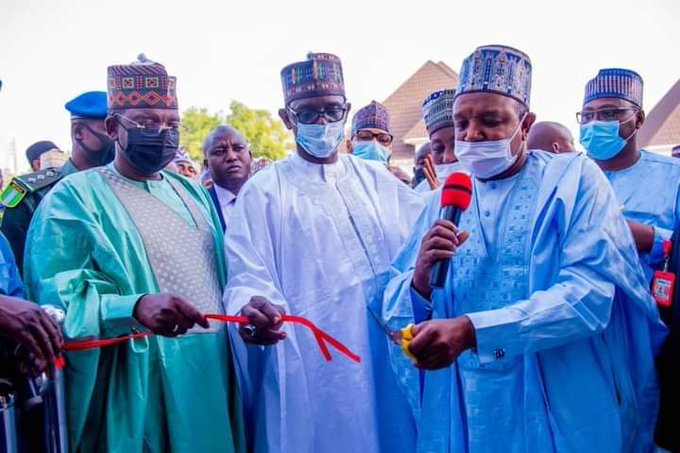 Three All Progressives Congress (APC) governors on Monday visited Zamfara to inaugurate some buildings, amid reports that Gov. Bello Matawalle is set to dump the Peoples Democratic Party.

The governors, Alhaji Mai-Mala Buni of Yobe; Abubakar Badaru of Jigawa and Atiku Bagudu of Kebbi, each inaugurated houses named after their states.

Matawalle built 18 detached houses to serve as accommodation for state governors and other officials.

Each of the houses was named after the 18 northern states.

While commissioning the Yobe House, Gov. Mai-Mala Buni who is also the National Chairman of the Extraordinary Convention Committee of the APC, commended Matawalle for modernizing the state.

“I am particularly impressed by what my brother, Matawalle is doing here in Zamfara in spite of dwindling resources coupled with the security situation faced by the state.

“This is the kind of development we need which also translates into the provision of dividends of democracy,” Buni noted.

He described Matawalle as a bridge builder, peace maker and dynamic leader who built resilient infrastructure and provided security to the state within a short time.

The governors also commiserated with the government and people of the state over the recent fire disaster which destroyed part of Tudun Wada Gusau market.

Matawalle said the construction of the houses was to provide secure accommodation of international standard to government officials and eminent personalities on official engagements in the state.

He added that the new houses would help in reducing the expenses being incurred by the government in accommodating such visitors in hotels and rented houses.

According to him, the houses were part of the many infrastructural projects provided by his administration to move the state to the next level of development.