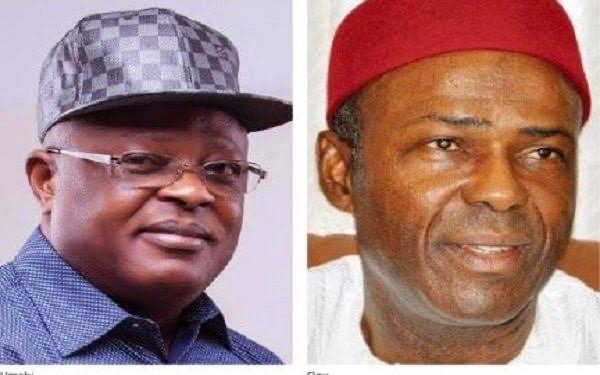 A chieftain of the All Progressives Congress (APC), Chief Prince Onu, said there is no rift between Gov. Dave Umahi of Ebonyi and Minister of Science and Technology, Dr Ogbonnaya Onu.

Onu was reacting to an alleged rift between the governor and minister over the leadership of the party in the state, in a statement on Wednesday in Enugu.

The APC chieftain described the rumoured rift as “false and unfounded’’, saying it was the handwork of political jobbers, who “thrive in building discord and playing mind games’’.

Onu, who was APC candidate for the Ebonyi South Senatorial District in 2019, said that the party in the state had become more united and stronger since the defection of the governor to the party.

He claimed that the governor consulted all leaders of the party before his defection and had been working to ensure unity of purpose for the progress of the party.

Onu said there was a cordial relationship between the minister and the governor, adding that they understand themselves as leaders giving that they had been strong allies in the defunct ANPP.

He called on members of the party in Ebonyi to remain unflinching in their support for Umahi and “disregard the commentary of impasse’’ between him and the minister.