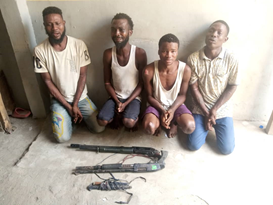 Operatives of the Federal Special Weapons and Tactical (SWAT) of the Nigeria Police, Lagos have arrested three robbery suspects.

The police alleged that the suspected robbers had been terrorizing and robbing unsuspecting passengers inside a moving bus at lekki CMS and Obalende bridge and pushing them off the moving bus.

Police alleged that the modus operandis by the suspects includes using their operational seven passenger bus popularly called ‘Kowope’ to pick unsuspecting passengers armed with guns and knives, rob them of their belongings and escape.

Police identified the arrested suspects as Seun Adeniyi, 27, who claimed to be the gang’s driver and resides at 8, Beach Road, Jakande Estate; Johnson Oke, 22, a resident of Jakande Estate, and Olami lekan Showunmi, 25, who lives at Jakande Estate Lekki Lagos.

Also arrested along side the suspects was the alleged receiver of the phones stolen from the victims, Seun Adetola, 33, who claimed to operate a barbing saloon at Jakande Estate, Lekki.

Items recovered from the suspects, according to the police includes two pump action guns, Knives and five expensive phones valued at N350,000.

Police alleged that nemesis caught up with the suspects in March, 2021. when the Deputy Commissioner of Police, DCP in charger of Special Weapons and Tactical, (SWAT) at the Adeniji Adele Road, Lagos Island, Lagos received a distress call from the victims of the Robbery that robbers where attacking them inside a moving bus at Lekki, CMS and Obalende bridge on a daily basis.

A Police source alleged that following the report, DCP Olatoye deployed the head of (SWAT) operation at the command, SP Ibrahim Yusuf to track and fish out the suspects.

The police arrested the three suspects inside their operational bus after about a week of surveillance and intelligence gathering along the Lekki Epe Expressway.

During the investigation, according to the police, the arrested suspects, allegedly confessed to the crime that they had been robbing passengers inside their operational bus around Lekki, CMS and Obalende bridge for long, but that they have not kill any of their victims.

In his alleged confession to the police, Adeniyi, the gang’s divers stated, “while I drive the bus, two others will sit inside the bus like passengers, while the other will stand on the door as a conductor, calling passengers and once the bus is filled up, we would zoom off and rob the passengers, and pushed them off the bus and escape.

A police source said the suspects would be charged to court after conclusion of investigation.