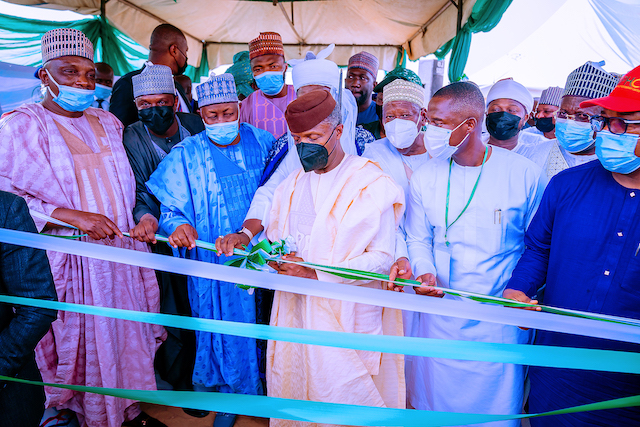 The Federal Government, on Friday, unveiled its new Solar Power for five million households in off-grid rural communities in Jigawa.

Vice President Yemi Osinbajo, while unveiling the Solar Power Naija Programme, at Jangefe community in Roni local government area of Jigawa, said the project was expected to create 250,000 jobs, through its value chain.

“The project launch is the first phase of the deployment of one 100,000 Solar Home System (SHS), under the Solar Power Naija Programme of the Nigeria Economic Sustainability Plan (NESP), by the Federal Government”.

He said the programme has the objective to expand energy access to 25 million individuals, representing five million new connections, through the provision of solar home systems or connection to a mini grid.

The vice president also announced that the federal government was working to ensure universal access to electricity in Nigeria, through the decentralization of grid power solutions.

He disclosed that the federal government had committed more than N140 billion to the project, with the Central Bank of Nigeria providing soft loan worth about 200 million dollars.

The Minister of Power, Mr Sale Mamman, said that when the project was fully implemented, it could generate over N7 billion in annual revenues for the federal government.

Similarly, Mr Abubakar Twumasi, the Managing Director, ASOLAR, the project handlers, thanked the federal government for giving them the opportunity to actualise the innovative vision.

Earlier, Gov. Muhammad Badaru of Jigawa thanked the President Muhammadu Buhari administration for supporting the state through its various interventions.

The News Agency of Nigeria (NAN) reports that Osinbajo had earlier witnessed the installation ceremony of the Minister of Water Resources, Engr. Hussaini Adamu, by the Emir of Kazaure, Dr Najib Hussaini Adamu, as the new District Head of Roni and the Galadiman Kazaure.