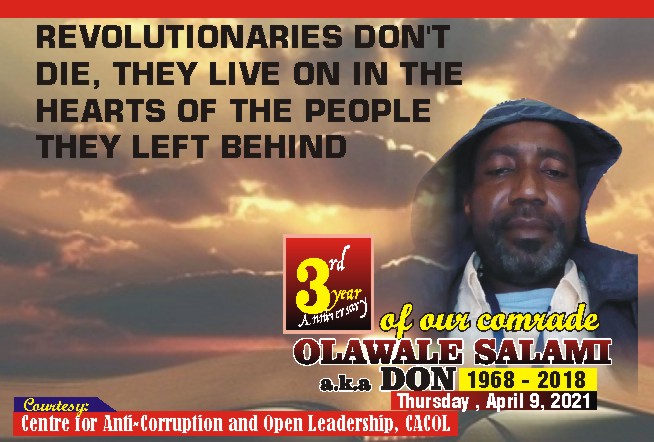 On Monday, 9th April 2018, the Nigerian and international community of activists were jolted with the rude shock of the sudden death of Comrade Olawale Salami familiarly called by all as the ‘Don’.

A perplexing death coming almost immediately after the celebration of his fiftieth years of sojourn on mother earth on Saturday, 24th March 2018.

He was not the first Nigerian of the Leftist persuasion to transit to the beyond, nor would his demise be the last of his ideological school of thought.

However, by his living, he demonstrated what it truly means to live honestly and in service to humanity.

In simpler terms, he spent his entire short adult life trying to make the world as he knew it, a better place for generations yet unborn.

Born in the late 1960s, at a time when the country was trying to find her footing amongst other nations of the world, having secured her ‘flag independence’ and lowered the Union Jack, less than 10 years ago, and also witnessed its first political disruption through a military coup de tat that later snowballed into an unnecessary civil war leading to the death of over one million Nigerians on both divides, he grew up with an experience of a country that was so full of potentialities and possibilities that, as at her independence in October 1960, Nigeria was rated as one of 10 most viable and potentially great nations for the future.

To a discerning and impassioned mind, this was no surprise, considering the fact that NIGERIA, with a population of about 45 million people had a Gross Domestic Product (GDP) of USD 4.196bn (Four Billion American Dollars) while China that was grouped together with Nigeria as one of future prospects had a GDP of USD69bn (Sixty Nine Billion American Dollars) with a population of 662,070,000 (Six Hundred and Sixty Two Million) people.

On political fronts, though Nigeria is currently enjoying almost 20 years of uninterrupted civil rule with a neo-liberal, pseudo capitalist economy that barely allows the majority of the people to eke out a living while more than over 75% (Seventy-five per cent) of her Universities, Polytechnics’ graduates are without jobs and no much prospects of any, the last elections held in the country have attracted more than 5,000 litigations, signalling one of most contentious elections ever held in the country, whereas China with a mixture of its Communist and neo-liberal economic system has taken the majority of its citizens out of poverty zone and poised to do more for its people in the future.

In the quest for a better future with assurances that should enable Nigeria to take her rightful place in the comity of nations, Wale joined many other Nigerians from different walks of life to agitate for a system change that could only be a product of a Sovereign National Conference (SNC) that must be truly sovereign, in deed and in truth.

His conviction was hinged on the belief that the Neo-Liberal economy being imposed on Nigerians is incapable of eradicating poverty amongst the mass and allowing the country to achieve true greatness on independent terms.

All these and many more symbolize what Wale Salami, the Don of Popular Struggle, represents in his lifetime by his pro-people, Socialist ideological bend.

He strongly believes that until our economic system was able to completely take humanity out of the poverty range, the struggle for a better life must continue.

Comrade Don was a great loss to the Centre for Anti-Corruption and Open Leadership (CACOL) because even with his intimidating revolutionary credentials, he was one of the earliest compatriots to believe in the need for the establishment of CACOL even when a host of others never gave the then Coalition Against Corrupt Leaders a chance to survive.

He helped CACOL at that initial stage to manage its online contact and correspondences.

Don served as a volunteer worker at various capacities even before, as fate would later compel it, that he had to be a full-time staff of the organisation wherein he was serving as the Director of Research, Programmes and Documentation (DRP).

He turned out to be the most diligent and committed worker, and the intellectual backbone of the Centre until death snatched him away on that black Monday, the 9th day of April 2018.

Whatever may be the plans of death, history has shown us that no revolutionary activist dies with his ideas.

Don’s ideas shall definitely outlive him in our hearts and actions.