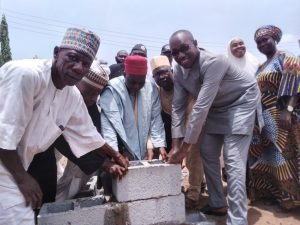 The Nigerian Union of Teachers (NUT), Kuje Branch has held the foundation-stone laying and fund-raising ceremony for the construction of its proposed N76 million secretariat in Paseli, Kuje Area Council, FCT.

Mr Abdullahi Sabo, the Chairman of Kuje Area Council at the laying of the ceremony, said that education was paramount and a priority in his administration.

The chairman was represented by the Head of Department, Education and Social Development in the council, Mr Uzo Nwankwo.

Sabo gave assurance of his maximum support in the actualisation of the unions aspirations, completion of the project and the development of education in the area.

Speaking, the Chairman NUT Kuje branch, Mr Audu Jen, said that the project, if completed would go a long way to increase the financial base of the branch which will create welfare packages for its members.

Jen commended members of the union, its local organising committee, the project committee, and other stakeholders for their resolute and doggedness in the actualization of the project.

He, however, urged the company handling the project to deploy all the professionalism in ensuring the completion of the secretariat on time and according to specifications.

The Project Chairman, Mr Moses Titus, maintained that the committee would ensure that the project would be an elegant, cavernous and efficient building conforming to modern architectural paradigms in the country.

Titus commended Rodbola & AM Cornerpiece Limited, the construction company handling the project, for having the technical know-how to execute the project.

He also added that the committee would go out of its way to deliver an architectural masterpiece that would truly reflect the profile of the nation’s NUT secretariat.

While soliciting for the support of the general public in contributing to the actualisation of the union’s aspiration, he called on the Federal Government to provide adequate budgetary allocation to education in the country.

The News Agency of Nigeria (NAN) reports that the highlights of the occasion was the presentation of the design for the proposed secretariat building by the contractor of the company that won the bid to design and construct the secretariat.

Thereafter, the ceremony came to a climax with the formal laying of the foundation stone by the representative of Kuje Area Council Chairman, traditional rulers, NUT FCT branch chairmen and the executive members of the union.