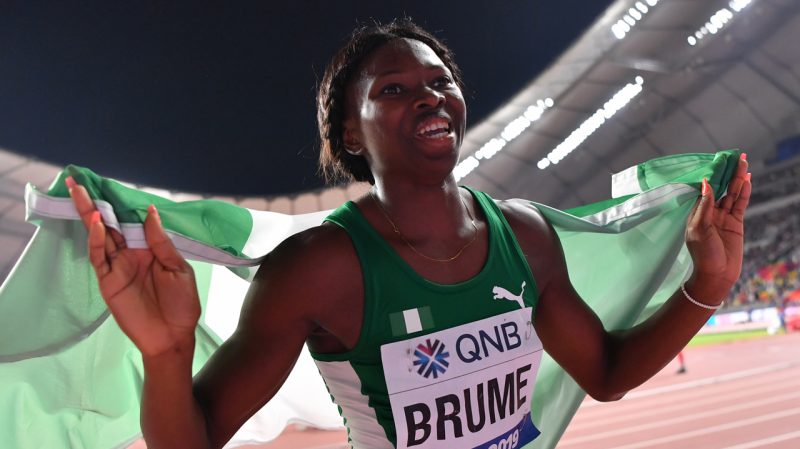 Ese Brume: hopes to win a gold medal at the Tokyo Olympics

Nigerian long jumper, Ese Brume on Monday said she aims at winning a Tokyo Olympics gold medal for the country.

Brume said in an interview at the ongoing 20th National Sports Festival (NSF) that she has been working hard towards this.

She said she wanted to replicate the feat of Chioma Ajunwa at the Atlanta 1996 Olympics, where Ajunwa won Nigeria’s first-ever Olympic gold medal.

“I have been training hard, and I am trusting God to get me a medal, and not just a medal but a gold medal.”

However, the athlete disclosed that she was not the only one working hard.

“I am working towards this with my coaches and hopefully by the grace of God our hard work will not go to waste,” she said.

The long jumper however urged the Federal Government to ensure adequate preparations for athletes for Nigeria to do well at the Olympics.

“The Federal Government needs to create a better atmosphere for all Olympics-bound athletes. We also need better training facilities.

“Apart from facilities we also need financial support so that we can take care of ourselves professionally for the Olympics, because some of us don’t have the finance.

“The support should not be just for athletes but our coaches as well. With this I can assure you that we will do well (at the Olympics),” Brume said.

So far, Brume said she had not gotten any financial support from the government towards her preparations for the Olympics.

“Nothing has been given to me to support my preparations for the Olympics. I don’t know about others (athletes), but I am hoping they (government) will do something soon,” the Rio 2016 Olympics long jump finalist said.

The bronze medallist at the 2019 World Athletics Championships also called on relevant stakeholders to support Nigerian athletes as they intensify preparations for the Olympics.

Brume, a 2014 Commonwealth Games gold medallist, also advised that a closed campsite with weather similar to Japan should be arranged for athletes as the Olympics draws closer.

The Cyprus-based Nigerian athlete remains one of Nigeria’s best medal hopes at the Tokyo Olympics.